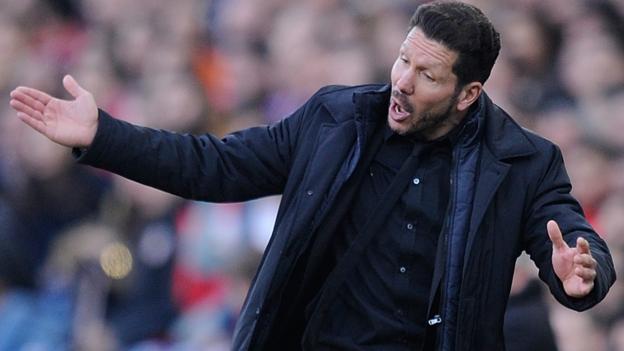 The Argentine believes his cross-city rivals will be damaged by the sale of the Portuguese and is not happy with Antoine Griezmann’s award snubs
Diego Simeone says Atletico Madrid are closer to rivals Real Madrid following the sale of Cristiano Ronaldo and is baffled as to why Antoine Griezmann has been overlooked in the Best FIFA awards.
Madrid won the Champions League for a third straight year in 2017-18 with Ronaldo once again the driving force in that triumph with 15 goals in the tournament.
But the Portugal captain left La Liga in a sensational €100m (£88m/$117m) switch to Juventus in July following nine trophy and goal-laden seasons at Santiago Bernabeu.
And Simeone believes his team, who finished above Madrid in La Liga last term and defeated Los Blancos in August’s UEFA Super Cup, are now on a more level playing field with their city rivals.
“From the results we aren’t worse than Madrid or Barca, from the individual characteristics of our players, yes,” he said in an interview with El Partidazo de COPE.
“Without Cristiano we have approached Real Madrid’s level, for sure.”
Simeone was also quizzed on Griezmann, who over the past four months has become a World Cup winner with France and helped Atleti to Europa League and Super Cup glory.
However, Griezmann did not make the shortlist for the Best FIFA Men’s Player, with Ronaldo, Luka Modric and Mohamed Salah battling it out – a decision the player himself labelled “bizarre”.
And Simeone was disappointed to see his star man’s achievements overlooked.
“He hasn’t had an explanation – World Cup winner, Super Cup, Europa League, second in La Liga, best player in the [World Cup] final,” he added.
“In this past year, he was the best in the world. It is a pity. We do not underestimate ourselves to think that it is because he plays for Atletico, it will be a lack of imagination of people who choose.
“Obviously it disappoints a little. But it’s clear that Griezmann was the best last season.”