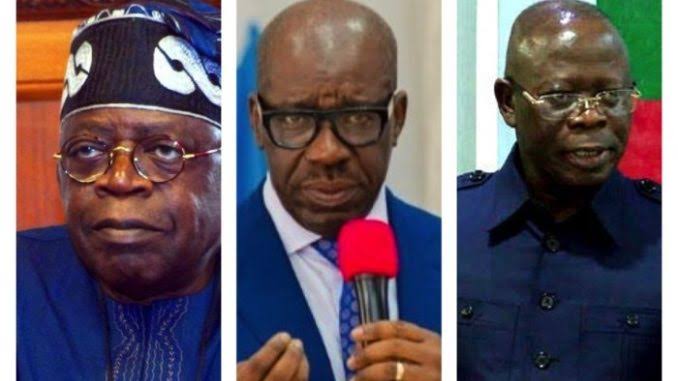 Godfatherism has constituted a phenomenal source of conflicts in the contemporary democratic dispensation in Nigeria. Beneficiaries of godfather politics, essentially, governorss, became the major antagonists of their political principal in the battle to eradicate godfatherism.

The godfather, for peculiar reasons during the first tenure of a loyalist, plots to prevent the incumbent from second tenure, anoints another loyalist as successor. Conflicts emanate.

National Daily investigation revealed that in some states like Borno, Kwara, Akwa Ibom, Lagos, Edo, Benue, etc, some incumbents succeeded in dismantling the godfather, and others failed.

Modu Ali Sheriff in the 1998 transition, consummated in 1999, was influential in the emergent All Peoples Party (APP). He won election into the Senate of the Nigerian National Assembly. Sheriff further extended his influence to ensure the APP candidate, Mala Kachalla, won the governorship election, in addition to others.

Sheriff inherited viable financial fortunes from his wealthy father, a renowned businessman, Mai Modu Sheriff, with which he bankrolled his political activities.

Senator Ali Modu Sheriff built a strong political dynasty during the first tenure 1999 to 2003, dominating the politics of Borno State.

The APP metamorphosed into All Nigeria Peoples Party (ANPP) in 2002 with the intention of transmitting into a national political party for the 2003 general elections.

In the build up to the 2003 general elections, Senator Modu Sheriff insisted on being given the ANPP governorship ticket in Borno State, while incumbent Governor Kachalla was preparing for a second tenure.

Sheriff resisted the intervention of the national leadership, took control of the ANPP in Borno State. Kachalla defect to the Alliance for Democracy (AD).

In the April 19, 2003 governorship election, Senator Modu Sheriff of the ANPP got 581,880 votes to defeat incumbent Governor Mala Kachalla of the AD who had 336,165 votes to place third. Ibrahim Kashim Imam of the Peoples Democratic Party (PDP) was second in the election with 341,537 votes.

The fall of the Borno godfather

Sherriff at the end of his second tenure in 2011, brought up Kashim Shettima, who succeeded him. Initially, there were innuendoes that Sherriff was contemplating to sponsor his wife, Fatima Sheriff or his younger brother, Mai Sheriff, as successor.

Sheriff later plotted to stop Governor Shettima from his second term. Sheriff in early 2014 attempted to hijack the ANPP in Borno State, which had fused into the All Progressives Congress (APC).  Shettima was, however, reinforced by the support of the APC national leadership from Abuja. Shettima overwhelmed Sherriff, who defected to the PDP.

Governor Shettima of the APC won the election with 649,913 votes, defeating the PDP candidate, Gambo Lawan, who had 34,701 votes.

APC won all the seats in the Borno State House of Assembly, including the Senate and House of Representatives of the National Assembly. The Sherriff dynasty collapsed beyond redemption, and the godfather was sent into political obscurity. 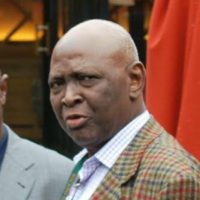 Dr. Saraki in 1999 of the Fulani emirate, a founding member of the APP, later ANPP, responded to populist demand for a Yoruba governor from Ilorin, sponsored Rear Admiral Mohammed Lawal who won the 1999 governorship election in Kwara State.

The governor was accused of encouraging litigations questioning the selection of traditional rulers in Ilorin Emirate.

Friction, thus, erupted between Dr. Saraki, a descendant of the Fulani emirate and Governor Lawal of a royal family descent in Ilorin.

Saraki, then, abandoned the ANPP, defected to the Peoples Democratic Party (PDP) with his political machine. He sponsored his son, Dr. Bukola Saraki, to succeed Lawal.

Governor Lawal also dumped the ANPP for the Alliance for Democracy (AD).

The federal might was at the behest of the PDP.

Dr. Saraki in the 2003 governorship election had 322,242 votes and defeated Governor Lawal. His sister, Gbemisola Saraki, also won election into the Senate in Abuja.

Battle within the Saraki dynasty
At the end of Saraki’s second tenure in 2011, the father was, again, contemplating sponsoring Senator Gbemisola Saraki, as his successor. Governor Saraki opposed it. The dynasty was at war with itself.

Saraki sponsored Abdulfatah Ahmed who won the governorship election on the PDP platform, while Dr. Saraki won election into the Senate; and later became President of the Senate.

Fall of the dynasty

In the 2019 general elections, the federal might was at the behest of the APC. Saraki lost the senatorial election in Kwara central with 68,994 votes to Dr. Ibrahim Oloriegbe of the APC who had 123,808 votes. Oloriegbe was Majority Leader in the Kwara State House of Assembly.

The APC led by the Minister of Information and Culture, Lai Mohammed, also defeated Saraki’s anointed PDP governorship candidate, Razaq Atunwa, who lost the election with 115,310 votes to the APC candidate, AbdulRahman AbdulRazaq, who had 331,546 votes.

The Saraki dynasty was down. However, Gbemisola Saraki, a member of APC, was offered ministerial position by President Muhammadu Buhari.

Senator George Akume, leading the All Progressives Congress (APC) in Benue State, in 2015, adopted Samuel Ortom, after losing the PDP primary election. Ortom defected The APC arrangements were altered and Ortom was given the party’s governorship ticket. A frontline aspirant, Emmanuel Jime, lost out at that point.

Liquidation of the godfather

Intractable frictions erupted between Governor Ortom and Senator Akume in the build up to the 2019 general elections over control of APC in Benue.

Governor Ortom, at the APC National Secretariat, Abuja, declared that he has been given a “red card” by Akume in Benue APC. The then APC national chairman, Adams Oshiomhole, intervened but failed to resolve the impasse. Oshiomhole gave Akume greater advantage in his mediation.

Governor Ortom dumped the APC and returned to the PDP. The governor decamped from APC with all local government chairmen, commissioners, members of Benue State House of Assembly, and others.

Secondly, Governor Ortom battling with the federal might at the behest of Akume, portrayed himself as the Defender of the Benue people in protesting and protecting them from the Fulani herdsmen killings in the state. The people believed and followed Ortom.

The godfather, himself, had in the February 23, 2019, National Assembly election, been defeated by the PDP candidate. Senator Akume with 115,422 votes, lost the Benue northwest (Zone B) senatorial election to Orker Jev, who had 157,726 votes. The godfather dynasty collapsed, but President Muhammadu Buhari appointed Senator Akume a minister of the republic.

At the end of his two tenures, Akpabio sponsored Udom Emmanuel for the 2015 governorship election, while he went to the National Assembly where he became the Senate Minority Leader.

Akpabio having 83,820 votes, lost to Chris Ekpeyong of the PDP who had 134,717 votes in the February 23, 2019, National Assembly election in Akwa Ibom Northwest senatorial district.

The political empire collapsed. However, President Buhari appointed Akpabio a minister in the federal cabinet. 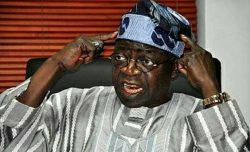 Asiwaju Bola Ahmed Tinubu returned from exile in 1998 to pick the governorship ticket of the Alliance for Democracy (AD) for the 1999 general elections. There were insinuations that late Engr. Anthony Olufunso William, won the AD primary election, but Afenifere leaders decided that the AD governorship ticket should be given to Tinubu in recognition of his involvement in the struggles to end the military regime and enthrone democracy in Nigeria. Funso William, then, defected to PDP.

The Deputy Governor, Koforowola Bucknor-Akerele, resigned on December 16, 2002, amidst impeachment proceedings in the Lagos State House of Assembly.

In the build up to the 2007 elections, Funso William was assassinated on July 27, 2006, at his residence in Dolphin Estate, Ikoyi, Lagos.

The Deputy Governor, Femi Pedro, that succeeded Bucknor, was also impeached on May 10, 2007, by the State Assembly after he defected to the Labour Party to contest the governorship, in defiance to Tinubu’s endorsement of Babatunde Fashola.

Tinubu’s undisputable godfather role became obvious after the 2003 elections when PDP won all the states in the southwest except Lagos. As the “Last Man Standing”, Tinubu fought fiercely in the court to recover some southwest states from the PDP. First, Ekiti was won and Kayode Fayemi became Governor. Later Osun, Ondo and Edo followed. However, Governor Olusegun Mimiko of Ondo State refused to align with Tinubu’s leadership, but others did.

In the struggle within the ruling party, Governor Fashola had considered Obafemi Hamzat as his successor in 2015 but Tinubu endorsed Akinwunmi Ambode. At the APC primary election, Ambode had 3,735 votes to pick the APC governorship ticket while Hamzat got 1,201 votes.

Ambode’s attempt to battle Tinubu for the APC ticket in 2019, after he had been rejected, culminated into negotiation between Tinubu and Fashola who re-nominated Hamzat for the APC ticket, for a consensus candidate. This resulted in the emergence of Babajide Sanwoolu as APC candidate and Hamzat as deputy governor.

After the struggle to eradicate godfather in Edo State, Governor Adams Oshiomhole anointed Godwin Obaseki to succeed him in 2016 after his second tenure. The game, however, changed in 2020 when Oshiomhole declared war against Obaseki, vowing to terminate the governor’s tenure in Edo State after his first tenure.

Oshiomhole deployed the APC structures in Abuja to disqualify Obaseki from the party’s primary election. The system, however, turned against Oshiomhole and removed him as APC national chairman within 60 hours Obaseki was disqualified.  The Edo governor quietly defected to the PDP where he got the governorship ticket with the Deputy Governor, Philip Shaibu.

The campaign slogan was clear in the Edo election which Oshiomhole sponsored Pastor Osagie Ize-Iyamu as APC candidate. The PDP conveyed to the Edo people the need to destroy godfatherism in the state, and subsequently, declared that “Edo is not Lagos.” The governor identified another super-godfather in Lagos that the people should resist.