HOW can we live peaceably together as a people by continuously telling ourselves lies? Has it now become our lifestyle to always rationalise obvious aberrations in this country and for how long can we afford as a people to continue like that?
Is it not surprising and at worse embarrassing the increasing sophistication and clinical coordination of the group of mindless attackers we still call Fulani herdsmen or cattle rearers that have meted chained terror to our people in different parts of the country?
To think that what is happening in the north central and now virtually every other part of the country is a mere conflict for grazing rights would only amount to naivety at best because it is without doubt now an evil wind that is blowing no section of the country any good.

The question to ask is: why is it that these so called people always take our security operatives unawares? They always finish their dastardly acts before arrival of our counter-insurgency security forces. Haba! And instead of sitting together to marshal out a coordinated approach to address this challenge, managers of our security apparatuses give us the impression that some of them may be privy to these conspiracies against our people.

How do you explain the recent incident in Agatu Local Government Area of Benue state, where Fulani herdsmen, backed by mercenary fighters (as already confirmed) invaded several communities killing more than 300 natives because they were cautioned to stop taking their cows into people’s farms?

Surprisingly, since the revelation that what we have been calling our cattle rearers were actually mercenaries well-trained in the act of causing mayhem, the government has not instituted any serious mechanism to unravel the real identity of these contract fighters.

Who are these mercenaries- are they Nigerians or foreigners? Where do they come from and who contracts them to go kill and destroy in different parts of the country particularly north central and now southeast and even south-south regions? Who arms them and how come they freely move around with ease with their sophisticated rifles and machine guns without being intercepted by our security operatives in different kinds of checkpoints scattered along our roads and in major cities and urban centres? Where is our intelligence community- the SSS and NIA and even the Police CID unit? First we may need to ask our government Is there anything in this Fulani herdsmen misdemeanour that other non-Fulani Nigerians do not know?

As canvassed by an analyst, “All in all, the murderous invasion of communities by herdsmen, like it happened in Agatu, is a mainly security issue. Those in charge of security in areas where these things happen should be held to account for the lapses that allow hundreds of people to be slaughtered in cold blood. The Nigerian government must be alive to its primary responsibility of protecting the citizens against attack and danger.”
Curiously, the federal government has been nonchalant towards devising appropriate and workable strategies to end these incessant deadly clashes in various parts of the country where it has become a regular news report to hear mayhems unleashed by so-called Fulani herders on farming communities?

Scores of suggestions by different interest groups and concerned Nigerians have been made for the banning of the current conflict-prone system of moving animals from place to place in search of food and water, and its replacement with the establishment of ranches and other forms of confined grazing space, where animals would be fed with hay and other modern feeds.

There is no doubt that the current pastoralist system urgently needs changing if Nigeria is to overcome the frequent clashes between herdsmen and indigenous populations, which have laid waste to many communities. The setting up of ranches remains the most feasible option.

It would be recalled that President Buhari told a delegation from the Centre for Humanitarian Dialogue in January this year that “a plan to map out grazing areas would soon be presented to the Nigerian Governors Forum as a temporary solution, until cattle owners are persuaded to adopt other means of rearing their cattle.”

My brother Senator Shehu Sani in his “Road map to putting an end to Fulani herdsmen violence in Nigeria,” had suggested amongst other things, the need to immediately set up seven grazing reserves in the states of Niger, Nasarawa, Kogi, Adamawa, Bauchi, Kaduna and Sokoto to significantly stem the movement of herdsmen southwards and drastically curtail the incidences of violent clashes with communities across the country.

As suggested, the grazing reserves should be jointly managed by the Federal Ministry of Agriculture, National Livestock Association, universities of agriculture and the leadership of the Miyetti Allah Cattle Breeders Association.

Above all Senator Sani’s suggestions, my attention was particularly attracted to what he described as the need to document, register and issue identification cards to herdsmen; and the federal government, through federal and state ministries of agriculture and the Cattle Breeders Association, should embark on this on a national level. This will stem the activities of violent criminals who masquerade as herdsmen to unleash violence against innocent and vulnerable communities.

No doubt, this is where the real problem lies: violent criminals who masquerade as herdsmen to unleash mayhem on innocent and vulnerable communities.

Now we have a president who himself is a cattle breeder and reportedly the Life Patron of Miyetti Allah Cattle Breeders Association, the pan-Fulani herders’ union.
Is the president going to now rise above all emotional pressures to take a dispassionate view of the crisis involving Fulani pastoralists and indigenous communities not only in Benue but even in states in southeast and south -south geopolitical zones of the country? We are watching. 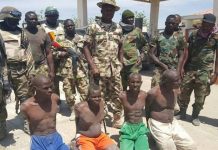