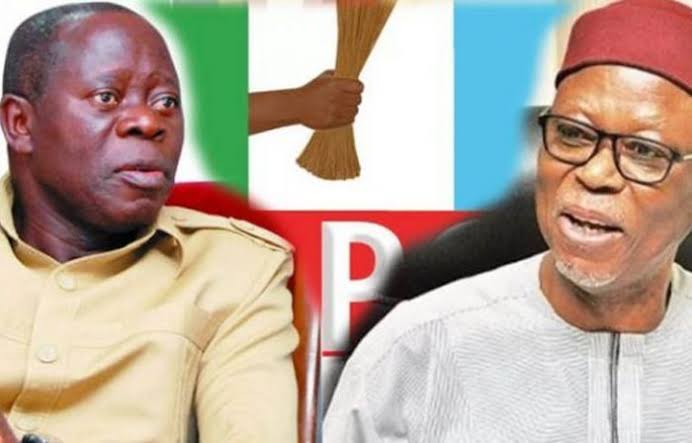 Former National Chairman of the All Progressives Congress (APC), Chief John Odigie-Oyegun, has urged his successor Adams Oshiomhole, to stop disgracing the party by interfering in the affairs of Gov. Godwin Obaseki of Edo.

Odigie-Oyegun gave the advice in a statement by his Public Affairs Adviser, Chief Ray Morphy, on Sunday in Abuja.

Oyegun, also a former governor of the state in the statement told Oshiomhole to give the governor a breathing space to concentrate on doing the job of serving the people of Edo.

“I wonder how he could easily forget that I never interfered or bothered about how he ran the government as the then governor of Edo all the while I occupied the position of the party’s National chairman.

“I am yet to come to terms with why it has become difficult for Oshiomhole to realise that Gov. Obaseki is the only APC governor in the entire South-south.

“And he should be allowed to concentrate on giving the people of Edo the dividends of democracy,’’ Odigie-Oyegun said.

“I want to also appeal to the Progressives Governors not to stand aside and watch their fellow governor hampered by a party chairman whose actions may lead to the political misfortune of the party in the state.

“The recent outburst by Gov Obaseki and the report by the House of Representatives ad-hoc committee, indicting the current National Chairman of the APC, have confirmed my earlier claim that Oshiomhole is responsible for the crisis in Edo.

“In the face of these confirmations, I want to urge Oshiomhole to stop disgracing the ruling party and the good people of Edo,’’

It was the second time that Odigie-Oyegun will call out Oshiomhole on the conflict between Oshiomhole and Governor Obaseki.

Last month, Odigie-Oyegun accused Oshiomhole of anti-party activities, for undermining Obaseki, ahead of the governorship election holding next year.

The former APC chairman was reacting to the decision of the APC National Working Committee on the crisis rocking Edo State House of Assembly. The NWC had ruled that the inauguration of the assembly by nine members and the election of a speaker were illegal.