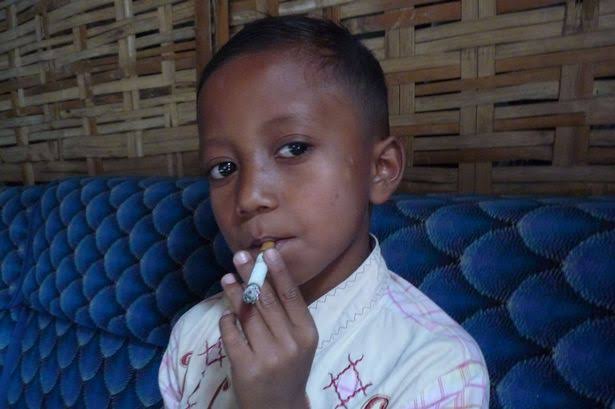 Recently some activists set up a protest to stop the increasing toll of underaged smokers in the country by enforcing the law banning the sale of tobacco products to underaged persons in Nigeria.
Setting up a campaign petition page http://www.regulate.tobaccofree.ng is one of the many ways the @Tobaccofreeng team plans to enforce this ban. They say, “Every day, a whooping 25,000 children in Nigeria between the ages of 10 to 14 use tobacco products. This equates to 17 children smoking every one minute. This is a result of their relative ease of access to cigarettes and other tobacco related products, which are sold to them by vendors”.
They are also using a hash tag to drive the campaign – #DontWaitRegulate.
Global reports states that the causes of adolescent substance use are multifactorial, but the media can play a key role. Tobacco and alcohol represent the 2 most significant drug threats to adolescents. More than $25 billion per year is spent on advertising for tobacco, alcohol, and prescription drugs, and such advertising has been shown to be effective. Digital media are increasingly being used to advertise drugs. In addition, exposure to PG-13– and R-rated movies at an early age may be a major factor in the onset of adolescent tobacco and alcohol use. The American Academy of Pediatrics recommends a ban on all tobacco advertising in all media, limitations on alcohol advertising, avoiding exposure of young children to substance-related (tobacco, alcohol, prescription drugs, illegal drugs) content on television and in PG-13– and R-rated movies, incorporating the topic of advertising and media into all substance abuse–prevention programs, and implementing media education programs in the classroom.

Some Numbers On Tobacco
More money is spent advertising tobacco than any drug—an estimated $15 billion per year,15 almost half of what the National Institutes of Health spends each year to study all aspects of health (www.nih.gov/about/budget.htm). The tobacco industry (often referred to as “Big Tobacco”) has engaged in a systematic campaign to attract underage smokers for decades and then lied to Congress about it.16,–,19 Given the demographics of smoking (1200 deaths per day, half of which are of middle-aged adults; 50% of smokers begin by 13 years of age, and 90% of smokers begin by 19 years of age), the industry must recruit young people as smokers.20 Recent statistics show that they continue to succeed. According to the 2009 Monitoring the Future study, nearly half of all teenagers have tried smoking, as have 20% of all 8th-graders.21 Cigarette advertising seems to increase teenagers’ risk of smoking by glamorizing smoking and smokers.3,20 Smokers are depicted as young, independent, rebellious, healthy, and adventurous. By contrast, the adverse consequences of smoking are never shown. As a result, the US Surgeon General concluded in 1994 that cigarette advertising increases young people’s risk of smoking.

The most heavily advertised brands of cigarettes are also the most popular.22 Tobacco advertising may even trump strong parenting practices.23 Teen magazines have attracted an increasing number of cigarette ads since 1965.24,–,26 Numerous studies have revealed that children or teenagers who pay closer attention to cigarette ads, who are able to recall such ads more easily, or who own promotional items are more likely to become smokers themselves.27,–,31 Joe Camel single-handedly increased the market share for Camel cigarettes from 0.5% of adolescent smokers to 32%.32 A recent meta-analysis of 51 separate studies revealed that exposure to tobacco marketing and advertising more than doubles the risk of a teenager beginning to smoke.

Some Numbers on Alcohol
Approximately $6 billion is spent annually on alcohol advertising and promotion. Similar to tobacco ads, beer commercials are virtually custom-made to appeal to children and adolescents, using images of fun-loving, sexy, successful young people having the time of their lives. Unlike tobacco advertising, alcohol advertising faces few restrictions. For example, whereas the tobacco industry gave up television advertising in the 1960s, beer, wine, and liquor ads are frequently featured on prime-time television, and young people view 1000 to 2000 alcohol ads annually. Much of the advertising is concentrated during teen-oriented shows and sports programming. All of the top-15 teen-oriented shows contain alcohol ads.38 Currently, teenagers are 400 times more likely to see an alcohol ad than to see a public service announcement (PSA) that discourages underage drinking.39 Teen-oriented magazines contain 48% more advertising for beer, 20% more advertising for hard liquor, and 92% more advertising for sweet alcoholic drinks than do magazines aimed at adults of legal drinking age.

According to the research, the effects of all of this advertising are increasingly clear. A sample of 9- to 10-year-olds could identify the Budweiser frogs nearly as frequently as they could Bugs Bunny. In a study of more than 3500 South Dakota students, 75% of 4th-graders and nearly 90% of 9th-graders recognized the Budweiser ferret ad. Many studies have revealed that exposure to alcohol advertising results in more positive beliefs about drinking and is predictive of drinking during early adolescence and young adulthood. The results of several longitudinal studies have shown a similar trend,53,54 although they have sometimes been mixed.