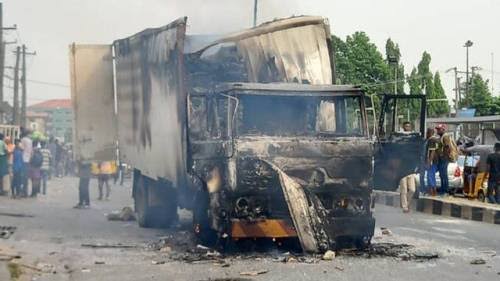 A junior secondary school 2 student of Omole Junior Grammar School, Ojodu, Lagos, identified as Ernest Ibeh, has died at the Lagos State University Teaching Hospital, Ikeja, where he was reportedly admitted on January 1, 2022.

Premium times reports that Ibeh is one of the students involved in the Ojodu truck accident in December 2021. A truck with registration number APP 438 YA, and driven by one Bolaji Kabiru, lost control and rammed into students on their way home outside Ojodu Grammar School, along Isheri Road, before Ojodu Police Station around 2:15pm.

However, spokesperson for the Lagos State Ministry of Education, Ganiu Lawal, on Tuesday, January 25, confirmed the death of Ibeh. Lawal said the government was not aware of the deceased’s involvement in the accident until December 31, 2021 when his condition reportedly became critical.

Lawal confirmed that the fatalities recorded from the accident now stood at three following the death of two other students at the scene of the accident in December.

Stressing that two students out of the 12, who sustained injuries were still hospitalized.

“We got the information about his involvement in the accident on December 31, 2021 because his parents chose to treat him at home.

“Immediately they informed us, he was admitted on January 1, 2022 at LASUTH.

We only have two students who are recuperating there now. They have had surgery and being treated but according to the doctors they must have a bed rest before they will be discharged.

We did all we could to save Ibeh, after his surgery, he was stable before he later gave up on Monday night.”