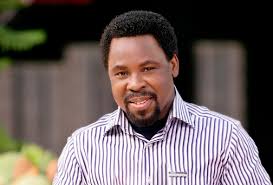 Share this on WhatsApp
Spread the love
The Registered Trustees of Synagogue Church of All Nation (SCOAN), led by Prophet Temitope Joshua have sued the Lagos State Coroner, Magistrate Komolafe Oyetade and Attorney General over the criminal indictment of the church and two engineers, who constructed the collapsed building that killed about 116 persons on September 12, 2014.
In the fresh suit filed before Justice Kazeem Alogba of Ikeja High Court, the Trustees of the church are asking the court to stop their proposed arraignment before Justice Lawal Lateef-Akapo of the same court.
Meanwhile, the State Government has vowed to challenge the fresh suit, as government was desirous of pursuing the issues relating to the matter to a logical conclusion.
But in their fresh action, the applicants are urging Justice Alogba to call for the record of proceedings of a Lagos State Coroner Court, presided by Mr. Oyetade Komolafe, which indicted them and recommended them for criminal prosecutions.
Komolafe, who conducted an inquest into the death of the 116 victims of the SCOAN’s building collapse, had on July 8, 2015 decided that the building, which killed them, was built without approval, adding that its collapse was due to structural defect. But SCOAN and its engineers – Messrs Oladele Ogundeji and Akinbela Fatiregun, had rejected the verdict, describing it as unreasonable and one-sided.
In September 2015, Justice Ibrahim Buba of the Federal High Court in Lagos had dismissed two similar actions filed by the engineers to squash the coroner’s verdict and prevent their arraignment.
In their fresh suit before Justice Alogba, they are seeking a judicial review of the Coroner’s proceedings, “for the purpose of quashing it,” says the state government.
Share this on WhatsApp
Related Topics:Lagos State CoronerProphet Temitope JoshuaSCOAN
Up Next