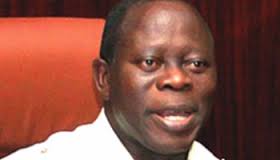 THE Chairman of the Joint District Society of Chartered Institute of Taxation of Nigeria (CITN), Hon. Joshua Asuquo, has extolled the transformational feat of the Executive Chairman of the Edo State Internal Revenue Service (EIRS), Chief (Sir) Oseni Elamah in the revenue system of Edo State.
He gave the commendation when he led other executives of CITN on a courtesy visit to the office of the Executive Chairman, in Benin City.
Asuquo who is also the Chairman, technical committee on the South-South Zonal Conference of the CITN stated that their visit was to acquaint the Executive Chairman with their forth coming maiden edition of the South-South Zonal Conference of the CITN slated for Port-Harcourt from January 19 to 23, 2016.
He acknowledged the facelift brought to bear on the revenue system by Chief Elamah, adding that the policy put in place cannot be matched in the country, judging by the present enviable profile of the state internally generated revenue (IGR) compared to the past.
He further stated that, it would not have been made possible if not for policies put in place like the tax education/enlightenment campaign as well as organizing stakeholders meetings.
Continuing, he said, ”apart from Lagos State, Edo State has gone far in tax matters.
According to him, “this is because you have been able to raise the state’s IGR profile from N280million to over N2 billion before the amendment of the PIT Act. You have also gone ahead to automate the revenue system by deploying the use of Point of Sales (PoS) machines and the introduction of the integrated Tax Administration System (ITAS).”
Mr Asuquo described as striking the 10-year strategic plan for revenue generation in Edo State which is focused on human capital reforms, infrastructural/operational logistics, automation of the revenue collection/accounting processes and corporate governance reforms.
In addition, he also said the Executive Chairman has also keyed the EIRS into the World Bank programmes to achieving certain feats that are commendable adding that others states revenue service should tap from his wealth of experience.