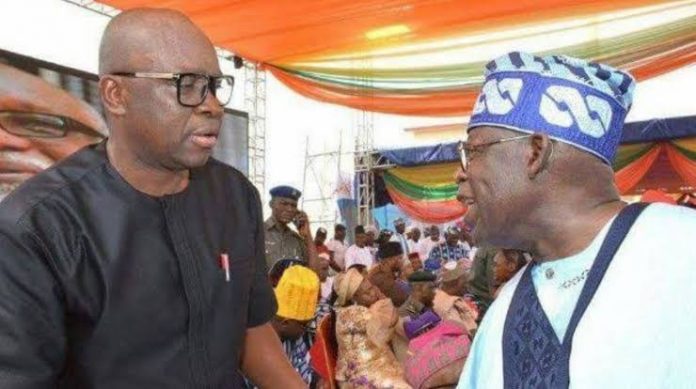 The national leader of the ruling All Progressives Congress (APC), Asiwaju Bola Tinubu, may have succeeded in recruiting former Governor Ayo Fayose of Ekiti State into the ruling party. The former Ekiti governor was gathered to be set to dump the Peoples Democratic Party (PDP) to join the ruling APC.

It was gathered that a former Ambassador to Jordan and Iran, Taofeek Arapaja, had revealed that Ayo Fayose is set to dump the PDP for the APC to support the APC national leader, Tinubu, for the 2023 electioneering campaign of the former Lagos State governor.

Some APC stakeholders had insinuated that Tinubu needed Fayose desperately to fight Governor Kayode Fayemi of Ekiti State in the state and retrieve the APC structure in Ekiti for the Tinubu presidential project. the APC national leader was also said to be disparate in recruiting Fayose into the APC to provide him strong support to consolidate and have firm control of the southwest.

Fayose has in recent time been converted to a bold defender of Tinubu and his 2023 presidential ambition.

Some PDP stakeholders, however, said they are not surprised Fayose is leaving the PDP for the ruling APC. They were of the belief that his defection may held his corruption case being prosecuted by the Economic and Financial Crimes Commission (EFCC).