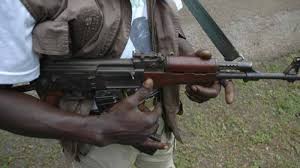 In addition to the night guard arrested, a soldier and his girlfriend have been busted in connection with the banditry rocking Zamfara  in the northwestern part of Nigeria.

The state government announced this on Friday.

Briefing newsmen at the Government House Gusau,  Deputy Chief of Staff Dr. Bashir Muhammad Maru said the officer and his girlfriend were arrested by his colleagues.

“The Army officer and his girlfriend were engaged in assisting bandits with military uniforms and ammunition in active connivance with other saboteurs,” said Maru.

“This arrest was only made possible through community-driven intelligence.”

Maru declared that the state government was awaiting the military’s action regarding the arrest.

He also echoed the position of Gov Bello Matawalle—that there were bad eggs among the security personnel and that until the system is cleared of these ones, it would be difficult to defeat bandits.

Maru also saluted the patriotism of the citizens that reported the army officer.

“Finally, Zamfara State government wishes to call on all media organizations to properly investigate and authenticate their facts before they rush to the press.”