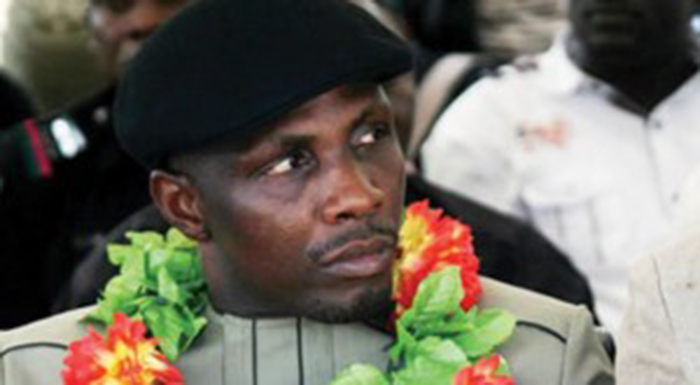 THE relative peace in the volatile Niger Delta region may have come to an end as militants at the weekend continued blowing ‎up of several flow stations and pipelines, prompting fears of a possible war in the coming days or weeks ahead.
There are however mixed signals as those behind the wanton destruction of oil facilities, as ex-leader of the Movement for the Emancipation of Niger Delta (MEND), Chief Government Ekpemupolo, also known as Tompolo has dissociated himself and the group from the escalation of hostilities.
Tompolo, Friday stated that he was not in any way connected to the destruction of oil facilities and alerted about a plot to hang it on him. He warned that such efforts will fail as he was for‎ sustained peace in the region.
The ex-miitant leader’s statement is also coming on the heels of a bench warrant issued by Justice Ibrahim Buba of the Federal High Court Lagos following his failure to answer to a 40 count charge proffered against him by the Economic and Financial Crimes Commission (EFCC) on allegation of involvement in a N13 billion fraud.
National Daily was unable to confirm whether those behind weekend’s bombings are associates or supporters of the MEND boss even though sources insist that it may not be totally unconnected to them as many of the militants were angry with the EFCC for seeking to prosecute their benefactor.
There are also reports that the militants have mounted General Purpose Machine Guns (GPMG) on speed boats and other strategic places an indication that they may be preparing for an all out war with the Federal authorities.
It was gathered that the obviously agitated militants blew up Abiteye Flow Station and Sagara to Chevron pipelines with dynamites, while Otumara and Makara oil facilities in Warri South West Local Government area of Delta State were bombed.
Eye witnesses similarly claimed that Elero gas pipeline, pipelines from Opuekeba to Dibi and Elero in Warri North Local Government area of the state were bombed.
Other locations reportedly blown up includes a crude pipeline at Kpokpo, a boundary community between Gbaramatu Kingdom and Madangho, an Itsekiri community. The pipeline supplies crude oil to Warri and Kaduna refineries.
This is apart from the pipeline that supplies gas from Escravos to the Nigerian Gas Company(NGC) located in Ughelli, Ughelli South Local Government area of the state.
Already, in addition to mounting GPMG on boats, the militants already clearing bushes to set up new camps in preparation for final onslaught with the security agents, who they expect to strike back soon.
More foot soldiers are said to have been recruited to boost available manpower in the anticipation of likely battle with security men that were building up in the area.
Security sources however disclosed that soldiers were taking their time awaiting directive from Abuja before they could confront strike back.
But the soldiers were said to limit themselves to patrolling the creeks and have mounted checkpoints along the waterways
Another security source said heavily armed soldiers have been moved to the creeks around Gbaramatu kingdom to check the alleged plans of “Tompolo and his boys”.
He said several gunboats including the newly acquired frigates have been deployed to the creeks while the military was building up in the area, apparently to engage the ex-militants.
A mass exodus of people have reportedly been noticed following the movement of heavily armed soldiers and equipment to the creeks in response to the explosion of the pipelines ostensibly caused by the regrouped ex-militants.