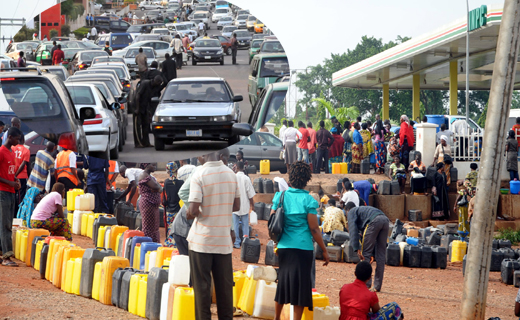 Treat fuel scarcity as in era of pandemic – Ex-PENGASSAN President.

Mr Peter Esele, an labour activist, on Friday advised that the lingering fuel scarcity in the country be treated as in the era of pandemic.

He said that persons who could work from home as was done during the early days of Coronavirus outbreak should be permitted to do so.

“By this, I mean that government and employers who know their workers can work from home, should allow them do so.

He also advised that as the scarcity persisted, if possible to reduce the number of days that employees go to work, that should be done.

“These can serve as a temporary measure because, out there, it is really tough and the fares for transportation have increased, some by 100 per cent.

“This is also affecting productivity, because if you look at the faces of Nigerians at the various bus stops’ queues you notice that everybody is angry.

“This is also affecting our mental health, because the pressure is just so much.

“So, government needs to find a way around everything,” he said.

While also advising Nigerians to only go out if extremely necessary and important he called on government to do everything possible to make the product available.

“Government should also ensure that the actual price at the depot is what is paid.

“Because one of the major reasons for this scarcity is that most gas stations no longer sell fuel for N162.5 per litre.

“And this is because the ex-depot price has been increased. Now the question is who authorised such an increase?

“They are not supposed to carry out any increase, because subsidy payment is still being made,” the former PENGASSAN president said.

He noted that although there were no products in many petrol stations the black market was thriving due to availability of product to them.

Esele also identified racketeering as another major reason for product scarcity in the country.

“Racketeering is another reason this scarcity persists.

“There are some gas stations that sell as much as N200 per litre, some N185, and you start wondering why they are selling at that rate.

“Then, there are the few selling for N165; this is where you find queues of cars stretching for as far as one kilometer. So it’s really tough.

“I’m hoping that this gets out of the way as soon as possible and NNPC finds a solution to all these.

“And my prayer again is that Dangote Refinery comes up as soon as possible.

Esele, also a former president of the Trade Union Congress (TUC), further said that although the price of crude oil had increased to between $100 per barrel and $113 per barrel, Nigerians might not feel the benefit yet.

According to him, when you have that, ordinarily, Nigerians are supposed to be happy because it means much money because of our export.

“But since we buy petrol in dollars, and sell in naira, and we have a weak naira, the government has to subsidise it.

“We are actually not going to enjoy the benefit of the 113 dollars because of the landing cost of petrol.

“I appeal to Nigerians, it may be difficult, but this too will pass.

“It is also difficult for the government,” he added.