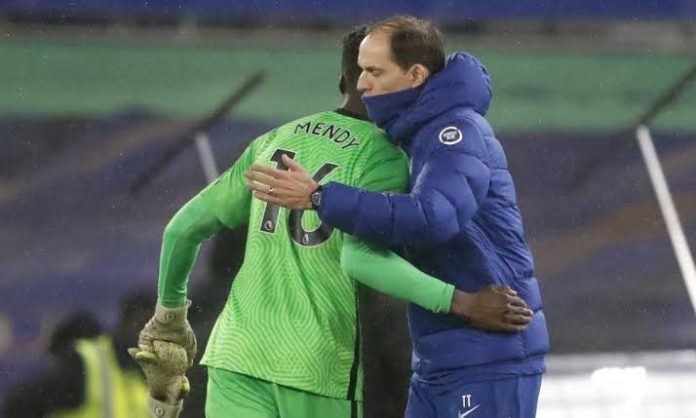 The Chelsea defence and the goalkeeper absorbed all the fireworks of Brentford to protect the lone goal lead scored in the first minute of stoppage-time by Ben Chilwell. The victory gave Chelsea six wins in their eight premier league matches. Chelsea have also conceded one goal since the beginning of the premier league this season.

Tuchel had remarked: “They trouble you with long throws and set pieces. They created big chances and Mendy was the key to the clean sheet.”

Before the beginning of the game on Saturday, Tuchel had cautioned Chelsea players not to expect an easy ride from Brentford, therefore, they should not underrate the host.

“We were very strong for 70 minutes and very lucky for 20 minutes, to sum it up.

“We escaped with the three points thanks to Edouard. It was like a cup game at the end; they took risks, and the atmosphere gave them a lot of courage.

“It is better to be there at the top but there are way too many teams who are close,” Tuchel had stated after the game.

Brentford had earlier established a status of giant killers after they defeated Arsenal at the Community Stadium, and later drew a game with Liverpool.

Brentford adopted a game plan to take away time and space from Chelsea players, thus tightening the game against the visitors.

However, Chilwell scored the lone and winning goal for Chelsea in the first minute of stoppage-time.

Two regular defenders of Chelsea, Thiago Silva, and Toni Rudiger, did not play in the game against Brentford.

Mendy in the 73rd minute saved a short range shot by Ivan Toney.

Mendy also stopped Saman Ghoddos from netting the ball; as  Trevoh Chalobah cleared off line a shot from Christian Norgaard.

Mendy worked assiduously to ensure Chelsea didn’t drop a point at Bretford, after  Liverpool had thrashed Watford 5-0 in their league game played earlier on Saturday. The victory restored Chelsea to the top of the table, leaving Liverpool to trail behind with one point difference.