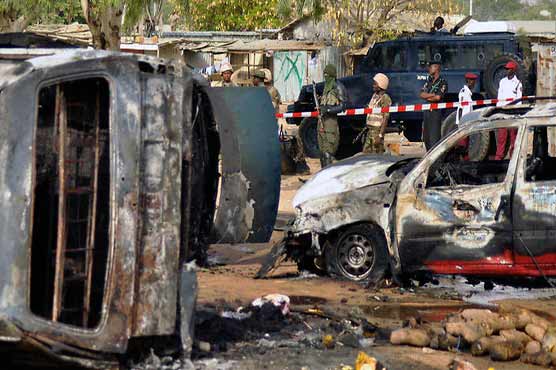 The supremacy of the military over Boko Haram insurgents was punctured on Friday as suicide bomber hit Madagali market killing over 50 people while several others were injured.

The first was said to have taken place at the Grain Market while the other occurred at a Second Hand Clothing Market in volatile northeast Nigeria.

Speaking about the incident, the Adamawa State Commissioner for Information, Mr Ahmad Sajoh, explained that the attack occurred at noon on Friday, a day known to have more people carrying out shopping in the markets.

National Daily further learnt of the possibility of the number of casualties raising consideration that the population of the market had reached its peak before the twin bombers perfected their evil machinations.

The figure of the wounded couldn’t be determined, however, according to the emergency management agencies, four people who were initially rescued died on the way to a hospital.

It would be recalled that the Chief of Army Staff (COAS) Tukur Buratai, last week ordered the military to clear the remaining terrorist hibernating in Sambisa forest, declaring that everything about Boko Haram will come to an end December, 2016