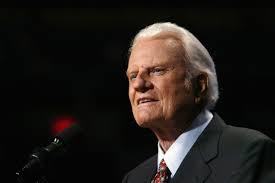 Share this on WhatsApp
Spread the love
The Believers’ LoveWorld President and Pastor Chris Oyakhilome has described the passage of American televangelist Billy Graham as a loss to the Church, stating how the body of Christ will miss him.
” But the Church rejoices for the great work  he did on this plane,” Pastor Chris said during the on-going Global Prayer Week yesterday.
Let us pray for his family and all those who worked closely with him.
Graham, 99, died Wednesday after a long battle with cancer.
He was known for transforming American religious life through his preaching and activism, counselling many  U.S. presidents before he died.
The Guardian UK newspaper quotes his spokesperson as saying Graham died at his home in North Carolina on Wednesday morning.
His contemporary Robert Schuller, the author of best-selling motivational book Tough Times Never Last, died in 2015.
Graham’s books are also popular among Christians across the world including Nigeria.
The American evangelical Christian evangelist was ordained Southern Baptist minister, and became well known internationally after 1949.
He was widely regarded as the most influential preacher of the 20th century.
Share this on WhatsApp
Related Topics:Believers’ LoveWorldBilly GrahamPastor Chris Oyakhilome
Up Next

Jonathan, IBB absent at Council of State meeting in Villa