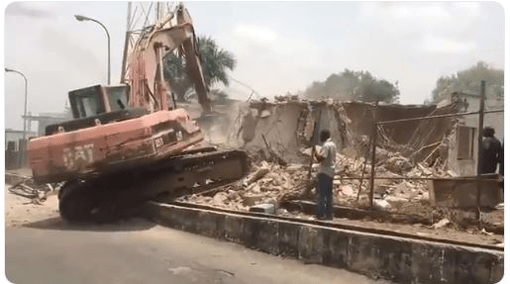 The Federal Capital Territory Administration, FCTA has given insight into why it pulled down the structure of the African Independent Television, AIT, saying that the media Organisation encroached into the land in which the structure was erected illegally.

Addressing Journalists Tuesday in Abuja, the Coordinator, Abuja Metropolitan Management Council, AMMC, Umar Shuaibu explained that the fence was removed because AIT failed to meet up with the agreement it reached with the administration.

The Coordinator said, “Following the illegal encroachment into plots of lands belonging to many Nigerians and the refusal by the Management of DAAR Communications to abide by the mutual agreement reached between it and the FCT Administration, officials from the Department of Development Control of the Abuja Metropolitan Management Council led by the Director, today removed a portion of the fence around the premises of the Africa Independent Television (AIT) in the Asokoro District of Abuja.

“It is important to let the public know that this removal was not intended to inflict any pain on the owners of the property but rather to enable other citizens have access to their legitimate properties. It is also a culmination of series of meetings between the Management of DAAR Communications owners of AIT and the Federal Capital Territory administration to end many years of misunderstanding.

“Specifically, in November last year, the Management of DAAR Communications led by High Chief Raymond Dokpesi paid a courtesy visit to the FCT Minister and they were received on his behalf by Chief of Staff to the FCT Minister, Bashir Mai-Borno who led the FCTA team made up of relevant directors and others in the discussions.

“The purpose of the discussions was to resolve the protracted dispute regarding the actual size of land legally allocated to DAAR Communications as against the area covered by their perimeter fence. The whole idea was for both parties to mutually agree to reach a settlement that would bring about permanent solution and forge ahead for the development of the FCT and the nation at large.

“After very fruitful deliberations on the areas of contention, each side expressed satisfaction over the new reconciliatory approach and the sincerity in reaching a logical and peaceful conclusion.
Share this on WhatsApp