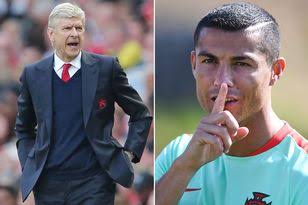 Wenger trended with two videos yesterday night. While the first one was about a scintilating visuals of the superb way the Lyon demolished Juventus. The second video is about Wenger talking good about how Madrid misses Ronaldo’s goals.
See video one here:
https://twitter.com/AseneWenger/status/1232768507852529675?s=19
See video two here:
https://twitter.com/beINSPORTS_EN/status/1232744403242045442?s=19
Arsene Wenger believes it is very clear where Real Madrid are missing Cristiano Ronaldo the most.
Arsene Wenger insists it is easy to see where and how Real Madrid are missing their departed talisman, Cristiano Ronaldo.
The former Arsenal boss is a managerial veteran. Not much will get past the experienced Frenchman.
As he works as a pundit for the beIN sports network, he has analyzed the statistics of Real Madrid with and Real Madrid without a certain Cristiano Ronaldo.
His conclusion is plain and clear for all to see.
He said:
“The last time Real Madrid won La Liga, 2016/17, they scored 106 goals.”
“[In] 17/18, they scored 94 goals.”
“2018, Ronaldo went and last year they scored 62 goals.”
“This year, on the model they are expected to score 69 goals. So they have a deficit of 40 goals.”
“Because their best goalscorer today is Benzema today, with 13 goals.”
“And their second-best goalscorer is Ramos. The central defender with five goals.”
“Hazard, one goal. Vinicius one goal. They have no goals from the flanks.”
“They have improved their defensive record, they currently have the best defense in La Liga.”
“But offensively, Madrid, you expect them to score between 80 and 100 goals.”
“And at the moment they have a deficit of 30 goals and that’s what it is at the moment.”
So with this should Real Madrid give Wenger the job if Zidane fails to impress or should they just go looking for another Ronaldo.
And if Ronaldo sees the second video he just could start lobbying for Wenger to replace Sarri.