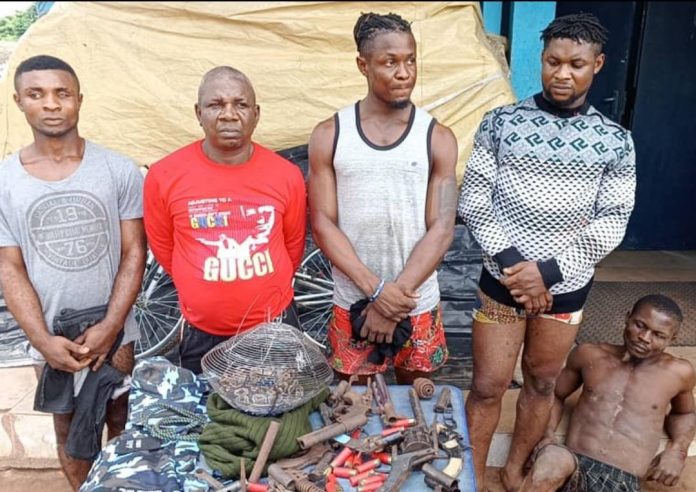 The Imo police command has arrested seven IPOB hoodlums at their shrine in Ubah Agwa in the Oguta LGA of Imo.

The State Police Public Relations Officer, PPRO, Micheal Abattam, told newsmen in Owerri, how the command’s tactical teams followed a tip off on May 18 to the shrine where the group’s herbalist fled earlier.

“With the positive revelations made in course of interrogating the suspects earlier arrested in connection with the killing, the team was able to locate the criminal hideout in Ubah Agwa in Oguta LGA of Imo State and immediately cordoned-off the area and tactically went into the den,” he said.

The oldest of the suspects is Nnadike Clifford, 72 while the youngest is Chukwuemeak Widom, 22.

While coming out of the terror camp, one of the suspects, Hycent Chimezie for the second time, attempted escaping and was maimed on the leg, the police spokesman said.

The police further said the suspects confessed to have murdered late Inspector Felicia Nwagbara who was the second wife to one of the suspects – Casmire Mgbugba.

The suspected hoodlums further stated that they were the manufacturers of the locally made guns recovered from them, which they also sell to robbers and kidnappers.