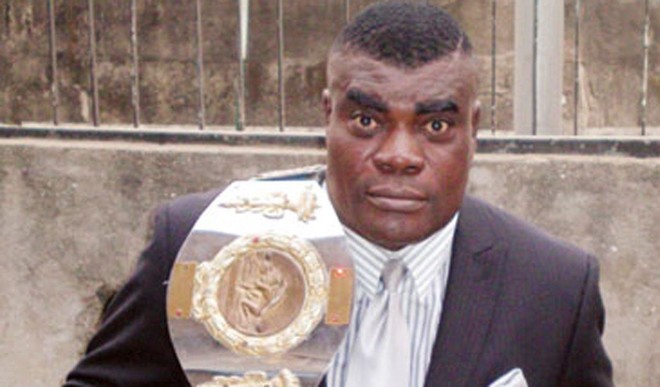 Share this on WhatsApp
Spread the love
John Uti, aka Power Uti, has been arraigned before an Ebute-Meta Magistrate’s Court for allegedly killing and locking up his wife’s corpse at their residence on Oremeji Street, in the Ilupeju area of Lagos State.
The 55-year-old former restling champ was arraigned on two counts of murder and disrespect for a corpse, which the police said were punishable under sections 165 and 223 of the Criminal Law of Lagos State, Nigeria, 2011.
Uti, on October 10, 2017, at about 10am on Oremeji Street, Ilupeju, Lagos, in the Lagos Magisterial District, was accused of abandoning the remains of his wife Toyin.
The police prosecutor, Sergeant Jimah Iseghede, brought an application for remand of the defendant, saying the case should be transferred to the Directorate of Public Prosecutions for legal advice.
However, the defence counsel opposed the application, urging the court to dismiss the charge of murder for lack of evidence.
Magistrate Bola Folarin-Williams called the Investigating Police Officer from the Homicide Section, State Criminal Investigation and Intelligence Department, to give the facts of the case.
The IPO said the case was transferred to the SCIID from the Ilupeju Police Division, adding that the family of the deceased were the complainant in the case.
According to him, On October 9, 2017, Toyin  complained of headache and on October 10, she died. She was certified dead by a doctor at the Gbagada General Hospital.
ALSO SEE: Cristiano Ronaldo wins FIFA’S best player award (See list)
“The husband took the corpse back home and left for Canaanland to see his pastor. He came back the following day and the corpse was eventually taken to the Isolo General
Hospital mortuary.  However, the corpse had started decomposing. The deceased family members alleged that he killed their sister.”
But the magistrate said there was nothing in the statements of the defendant and witnesses to suggest that Uti killed his wife.
An autopsy report on the death showed that the deceased died from acute cardiac failure and hypertensive heart disease.
The magistrate then quashed the remand application brought by the prosecutor and admitted Uti to bail in the sum of N500,000 with two responsible sureties, blood relations, in like sum.
The case was adjourned till November 15.
Share this on WhatsApp
Related Topics:CanaanlandJohn UtiPower UtiWrestler
Up Next