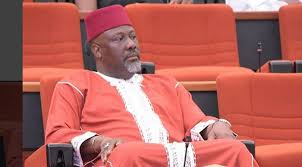 There was a mild drama on the floor of the Senate when lawmaker representing Kogi West in the Senate, Dino Melaye, shed tears while recounting the ordeals of workers in the state following months of unpaid salaries.

Melaye, drew the attention of lawmakers to what he described as the pitiable state of Kogi state workers, who have not been paid salaries for about 21 months.

While explaining the precarious situation of the workers to the Senate, under point of order, the senator said the non payment of salaries to the workers has become a major cause of suicide in the state.

However, He urged the Senate President Bukola Saraki to draw the attention of President Muhammadu Buhari to the matter for appropriate interventions.

The Senate noted Melaye’s point and promised to look into the matter while other lawmakers took turns to console Melaye who shield tears with others offering him handkerchief to clean up his tears.

A Director in the Kogi state Civil service had earlier this month committed suicide over alleged non payment of his 11 months salaries.

Meanwhile, the Kogi state government had in a press statement signed by the state Head of Service, Deaconess Deborah Ogunmola, said the deceased civil servant was paid up till December 2016.

Ogunmola said that his pay was stopped after proof emerged that he falsified his age records. His confession to the offence is on video to justify government stoppage of his salary.

Share this on WhatsApp
Related Topics:Kogi StateSenate Dino MelayeUnpaid Salary
Up Next

The Perilous Sojourn to “Yahoo Conservation” in Nigeria