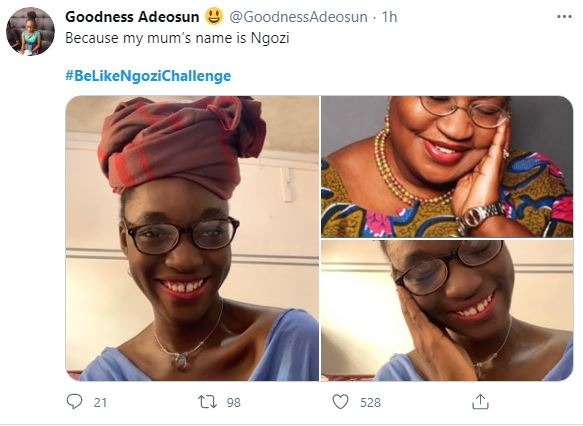 Following her election as director-general of the World Trade Organisation, Ngozi Okonjo-Iweala has been stirring the media, locally and internationally.

While she was commended for shattering the glass ceiling as the first woman and the first African to head the global body, she has also become a model of sort in her home country.

Nigerian women are now dressing up the way Ngozi dresses: African fabric, basically skirt and blouse, with the head gear, same fabric to match. All the time.

Obviously, everybody likes the sweet smell of success.

Goodness Adeosun got in in the challenge because, she tweeted, her mother is also Ngozi.

Idongesit Uduehe said she tapped into Ngozi’s headtie. The young lady hopes to become mine and steel minister someday.

Other tweeted more interesting reasons they now dress up like the former finance minister.