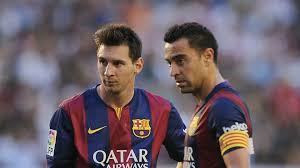 Share this on WhatsApp
Spread the love
By Ediale Kingsley
Quique Setien will be sacked at the end of this season. And after that we may see Xavi take over. Xavi will become Barca’s coach after winning 25 trophies for the club as a player. And as Al-Sadd’s coach, he has won the Qatari Super Cup and Qatar Cup  trophies.
When is he coming? Anytime soon. He is preparing and ready to take over. Yeah, he want’s to take over not just as a figure head. He intends to make all footballing decisions.  And with the current set up, that may be impossible. So we may likely see Xavi return after Barcelona’s next presidential election, which will happen in June 2021. At least we already know the current leader Josep Maria Bartomeu isn’t seeking re-election.
Xavi intends to start from scratch. Messi will most likely retire when Xavi takes over. I can’t be sure, but I see Messi leaving Barca after 2 seasons under Xavi. How many seasons did Ronaldinho spend with Pep? You get the idea?
Xavi is Pep Guadiola 2.0. Puig, Fati, De Jong, and Roberto will be the only untouchables when Xavi starts. He said he is starting from zero. This is what the Point Zero means. Obviously, Suarez will leave. Pique will retire. Busquets could be captain for a short period. Players will come. This is Barca.
I still believe Neymar will come. But if he doesn’t, Brazil will always produce another Neymar. La Masia could rise again. When a Xavi says he is coming to rebuild from scratch, surely, a project like La Masia, which is dear to his heart, wont be abandoned. Xavi returns home. Hopefully Barca returns to the days of glory. Cos what we see now is far from glory. We have a Barca playing like Arsenal sometimes, other times they play like United or Chelsea. No Barca is better than this.
Until Xavi returns. We expect the team to manage themselves to achieving something tangible this season. May Barca not play Chelsea or Arsenal or Man United before Xavi comes. Cos right now there’s no assurance that Barca will win any of these clubs. Which is a big shame.
Share this on WhatsApp
Related Topics:FC BarcelonaLionel MessiXavi
Up Next