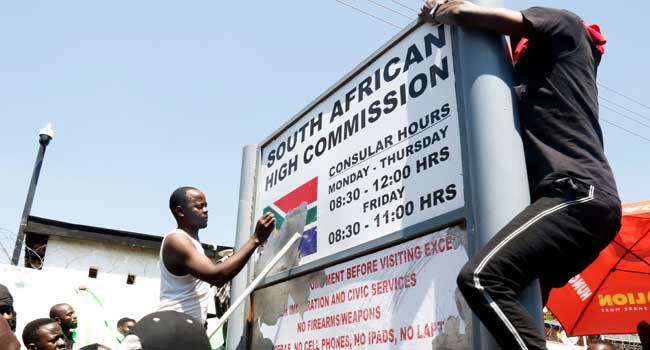 National Daily learned that the angry students defied the massive police presence to invade the embassy and ensure they caused enough damage.

Reports indicated that not even the address by the Zambian General Police Inspector, Kakoma Kanganja, could discourage the people, Zambians were said not to be satisfied with his statement.

It gathered that Zambia has cancelled an international friendly football match which was to be played in Lusaka next weekend with South Africa.

Secretary-General of the Football Association of Zambia (FAZ), Adrian Kashala, had explained to AFP: “This is because of the security concerns, you never know what can happen. We want to be sure of the security of (the) visiting team”.

It was said that attacks on foreign stores began a day after South African truckers started a nationwide strike on Sunday to protest the employment of foreign drivers. They blocked roads and torched foreign-driven vehicles mainly in the southwestern KwaZulu-Natal province.