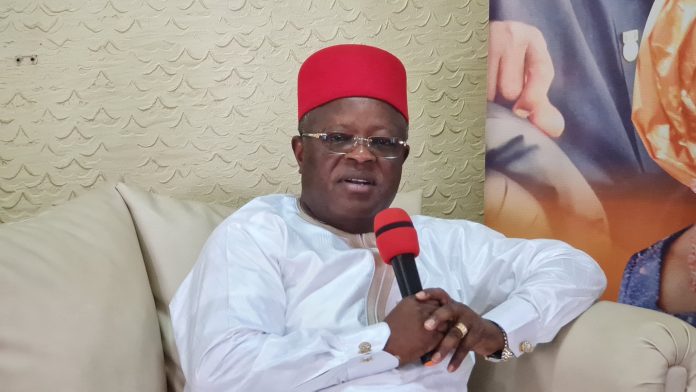 Governor of Ebonyi State, Dave Imahi has described a former minister of Aviation, Femi Fani-Kayode as a liar for saying he was instrumental to his (Umahi’s) defection from the PDP to the ruling APC.

Umahi denied Fani-Kayode’s claims on Friday when he appeared on Channels Television.

Fani-Kayode, a staunch critic of President Muhammadu Buhari, and a chieftain of the Peoples Democratic Party (PDP) had on Thursday announced his defection to the ruling All Progressives Congress (APC) a party he had vowed he would never be found dead in.

Fani-Kayode said: “I spoke against President Buhari from the outside, now I know him from the inside. I am not saying he is an angel or a demon. The APC I was taking about that time is not the same today. Let’s focus on unity, peace, and togetherness.

“There is a time to condemn and criticise people. There is also a time to come together, work together to achieve unity. Joining APC now is the way forward irrespective of what people may think about the party.

“APC is a liberal party. A lot has happened in APC over the years. The party has changed and the President has accommodated the change. Had the APC leadership not changed I wouldn’t have joined them.

“I am doing the right thing based on conviction and understanding. This is the right decision for me, love me or hate me, it will not take anything away from me.”

Fani-Kayode who was presented to President Buhari at the Aso Rock Villa after his defection, had stated that he was instrumental to the defection of a number of governors from the PDP, including Umahi, to the APC.

But Umahi said this was a lie, adding that he defected to the ruling APC on his own volition.