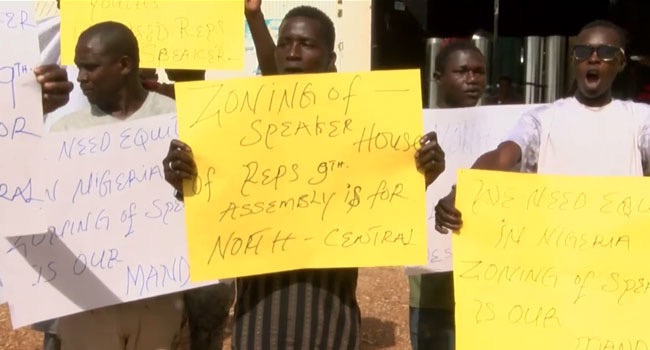 Several youths in Plateau, Niger, and Nasarawa states early Monday morning took to the streets of their respective states protesting the plan to take the Speaker of the House of Representatives in the National Assembly to the south west, which already has the vice president, in the Ninth Assembly. The protesting youths demanded that the Speaker of the House of Representatives be zoned to the north central geo-political zone for equitable power sharing in the country.
In Plateau, the demonstrators under the auspices of North-Central Concerned Youths held a peaceful protest in Jos, demanding the zoning of the speaker to the region for equity and justice.
They gathered at the office of the All Progressives Congress (APC) in Jos, carrying placards with various inscriptions.
The protesters emphasized the role of the north central in the re-election of President Muhammadu Buhari and the performance of the party in the 2019 general elections.
They, therefore, called on the leadership of the APC to intervene and ensure that the region was not marginalized in the zoning of the leadership of the National Assembly.
In another protest in Minna, Niger State, the youths accused APC leadership of a plot to marginalise the north central in the power sharing of the country.
The protesting youths carried placards with different inscriptions, demanding President Muhammadu Buhari to intervene in the matter and ensure that the principle of Federal Character is observed in the composition of the National Assembly leadership.
They admonished that any attempt to deny the zoning the opportunity to produce the Speaker for the Ninth National Assembly would not do good to the unity of the country.
Several youths in Nasarawa State also took to the streets of Lafia to demand that the north central be given the opportunity to produce the Speaker of the House of Representatives.
As at noon, the protests were noticed to have gone down. The youths had departed the streets after they have delivered their messages.

Share this on WhatsApp
Related Topics:Mas protestNational Assembly
Up Next