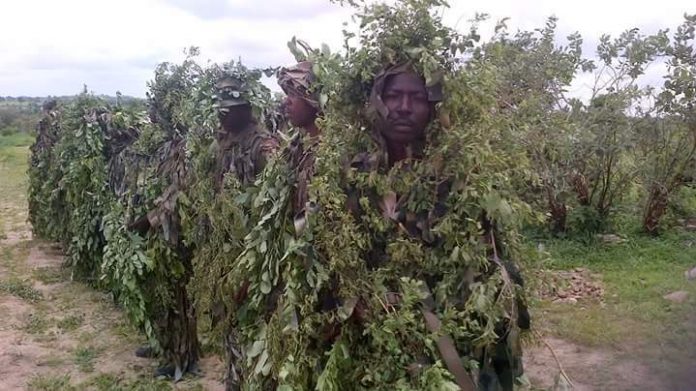 If there is any military operation that had elicited one of the greatest condemnation, vicious attacks and vituperations, it is certainly the Nigerian Army “Operation Python Dance 2” in the South East Nigeria.

Fortunately, however, when Operation Python Dance 1 held in Bayelsa/Rivers States in 2016, it was welcomed with unprecedented enthusiasm; especially so, as it led to the arrest of some notorious criminals and the decapitation of kidnap dens in the region.

To say the least, most of the problems rocking the fabrics of the country, often times, is deliberately attaching of anything national on sentiment, tribalism, ethnicity and politics of bitterness no matter how relevant such a thing is to national development or security.

All over the world, the military is saddled with the responsibility of defending the territorial integrity of a country, with Nigeria no exception.

Unfortunately, the militarisation of the Nigerian society occasioned by many years of military juntas brought service personnel rather too close to the civilian populaces and that also tends to affect their relationship positively or negatively.

Regrettably too, the years the military have spent combating insurgency and various monstrous attacks of military post and outpost, barracks and installations coupled with the number of deaths of soldiers and civilians from such attacks by the sects, have made the military more aggressive despite its training formula.

It is worrisome, therefore, that people ascribe ethnic colouration/cleansing to the on-going operation in the Southeast from the standpoint of the clash between the Nigerian Army personnel and members of Indigenous People of Biafra (IPOB) led by Nnamdi Kanu.

No doubt, if people were a bit circumspect and allow common sense to prevail, perhaps, we wouldn’t have had such confrontation that pitched the military with civilians as espoused by the IPOB.

Given reasons for the operation, Gen Abubakar affirmed that it was “aimed at ensuring a united and cohesive country where everybody is safe” but added that “it was targeted at criminal elements” that have infested the South East like a behemoth.

Emphatically, he stated that “The police gave reports of crimes in Anambra and it became necessary that the army should step in to assist” in dealing with the multifarious criminal manifestations in the region.

Adumbrating, he affirmed that since the operation started, “the level of crime rate has drastically reduced, noting that the NA will always respect human rights as enshrined in our Rule of Engagement and Code of Conduct for which every soldier respects.”

While appealing to the citizens to see reasons with the military carrying out the operation at this time, noted, “We should not be sentimental about things; we should look more at national interest, rather than personal and parochial interest when dealing with security issues.”

From the point of view of military operation which pitched them with members of IPOB, it is morally right and justiciable to point out that every military; especially in peace time, do carry out sundry military operations and drills to keep personnel fit in case of any eventuality.

Undesirably, because we tend to blow so many things out of proportion, even within the military circle, due to politics, too much information are in the public domain hence certain covert operations are overtly revealed.

Despite that, however, no military would wait until something terrible happened before putting its men to test. Erroneously, any military that does that risk the lives of its personnel and the citizenry.

On the bases of that, from the standpoint of what “Operation Python Dance 2” is designed to achieve, and despite the volatile situation in the Southeast, IPOB ought to be sensitive and call its members to be responsive to national security question rather than allegedly challenging military patrol which allegedly snowballed into attacks on both sides.

It is also right to say that that there is no part of the six geopolitical zones that there is no military campaigns currently on-going. The idea of getting emotional about any operation, therefore, should not arise especially over the “Operation Python Dance 2.”

Despite the vilification, analysts are of the view that people should also remember that the same army in 2010 when there was a Joint Military Task Force in Abia decimated the notorious Obioma Nwankwo aka Osisikankwu and his gangs after they held the city hostage kidnapping both locals and foreigners to the extent that some indigenes of the state couldn’t travel home during yuletide period.

These “Opeartion Sara Daji” and “Operation Harbin Kunama (Scorpion)” are presently ongoing in the North West. They are designed to battle the activities of criminal gangs like armed bandits, cattle rustlers and robbers operating particularly in Zamfara, Kaduna and fringes of Sokoto, Kebbi, Katsina and Kano States.

These criminal gangs have held Nigerian citizens in the jugular hence the military must assist the police to ensure enduring peace.

Operation AWATSE has been going on for several years and has achieved monumental results in its operation around Arepo in Ogun state and Ikorodu area in Lagos state respectively. Since the operation was initiated and supervised by Defence Headquarters in Abuja, it has succeeded in its multifarious task of containing criminals like pipeline vandals, militants around Lagos-Ogun States, particularly at Arepo, Ikorodu areas.

Also, it has also effectively tackled the activities of illegal oil bunkering and pipeline vandalism, which before now, were regular occurrences.

Few years ago, Plateau state was a cesspool of deaths. The state harvested quantum of deaths to the extent that some communities like Barkin-Ladi, Dogonahauwa in Jos South, a Berom Community; Miango in Bassa Local government Area; Riom; Bokkos; Langtang North and Langtang South as well as Wasa Local government areas were like ghost towns.

With the avalanche of those monstrous killings coupled with the inability of the police personnel to subdue the criminal elements, “Operation Safe Haven” domiciled in Plateau state was formed.

Its areas of operations were later extended to Benue, Kogi, Nasarawa and Kwara States to quell ethno-religious conflicts and other criminal elements. At the moment, the ancient city of Plateau State is breathing air of freedom from the crutches of criminals and insurgents.

For close a decade, this region witnessed the fiercest battle after the 1967-1970 civil war in Nigeria. The region was also overran and decimated by Boko Haram insurgents to the extent that social life, telecommunication and the entire economy was in ruins.

The ferociousness of the terrorists largely pitched the military with the locals which have often times, led to various accusations by some international bodies especially the Amnesty International (AI) that the military carried out extra judicial killings.

“Operations Gama Aiki,” is a multi-national operation with troops from the Lake Chad Basin Commission member states. In addition, “Operation Lafiya Dole” has been operating simultaneously with “Operation Crackdown” aimed at mopping up Boko Haram terrorists in the North East.

To some significant extend, these operations have restored hope, reclaimed lost territories and the inhabitants are ecstatic about their level of achievements at pushing the insurgents to the fringes.

The Nigerian Navy has a major operation codenamed “Operation Delta Safe” as presently constituted. It was reinvigorated a couple of years ago and renamed from its former “Operation Pulo Shield”.

However, these operations were designed, not targeted at any individual or group but met to crush the resurgence of Niger Delta militants and other criminals gangs like oil theft, pipeline vandal, bunkering, illegal oil refining in the region. At the moment, Nigerian Army personnel are perfecting arrangement to have “Operation Crocodile Smile 2” in the region.

However, “Operation Python Dance 2” that is still ongoing is tailored to sustain the previous operations in the South South. Although, members of IPOB clashed with personnel of the army, it is not enough to say that it has not achieved any result considering that military personnel were able to decapitate and neutralised criminal gangs in the region.

Other sundry military operations include Operation Mesa which cuts across the South West region especially in Lagos State.

Importantly, within the ambits of military Rules of Engagement, it has done its best to contain the nuisance value of criminals and other individuals, who unwittingly, violate the laws at the expense of their whims and caprices.

For the fact that a military operation snowballed into having a clash with some members of a community; a practice that could have been avoided if some elements had conducted themselves responsibly and respect some constituted laws and institutions, is not enough to condemn any military operation during peace time.

It is also instructive to indicate that a society desires the kind of military it has, if only it nurtures it, train, and prepare for a day nocturnal enemies could strike. Without adequate training and rejigging previously learnt modus operandi, such force is only a tool in the hands of the enemies.

Interestingly, it is only untrained and mentally unfit military force that could be subjugated by a rag-tagged insurgents or other uprising that would want to make its impact felt in the scheme of things.