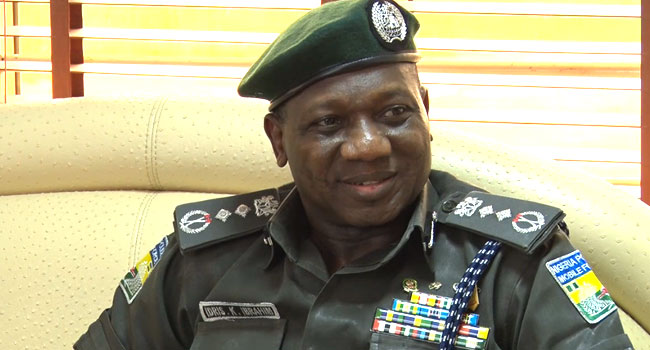 Share this on WhatsApp
Spread the love
The family of the wife of Inspector General of Police (IGP) Ibrahim Idris have started throwing tantrums at Senator Isah Misau, threatening to deal with him for lying against their daughter, Mrs Asta Idris.
The family, who are perfected plans to drag the Senator to court, said that Misau has told the nation lies on the floor of the Senate by allegedly attacking the IGP that he secretly married Asta in Kaduna after impregnating her.
Mrs Asta’s family had faulted Misau declaration on the floor saying that the IGP didn’t marry their daughter in secret but was done in the glare of the public.
The family further buttressed that the marriage was conceived publicly at the Sultan Bello Mosque, Kaduna and see no reason why a Senator of the Federal Republic of Nigeria would so “wickedly” concoct such lies knowing full well it was not true.
Explaining further, Mr. Nasiru Baba Saleh, a member of the family, disclosed that “Misau lied against their daughter and that he must prove the allegations in court.”
“Truly, we’re seriously angry, because this is a girl that grew up in a responsible way. She got a very good upbringing, and we married her out peacefully. We see no reason why this man will come publicly inside the Chamber of the Senate to say the man impregnated her before he married her.
ALSO SEE: Nigeria IGP has been bedding female cops, says senator
“What is his proof? This issue has gone viral on the social media. Both parents are crying.
What kind of defamation is this? We have evidence. We have the pictures and everything.
The Commissioner of Police and DC Operations were there.’’
He explained that that the wedding was done publicly and marriage certificate was issued to them. “We’ll have to sue him for defamation of character of the girl and the family. We’ll do that within the week. We’ll file the matter, and we’ll go with all the evidence, including invitation cards and everything. Misau should come out to prove the all his allegations before a competent court of law,” Saleh reiterated.
Share this on WhatsApp