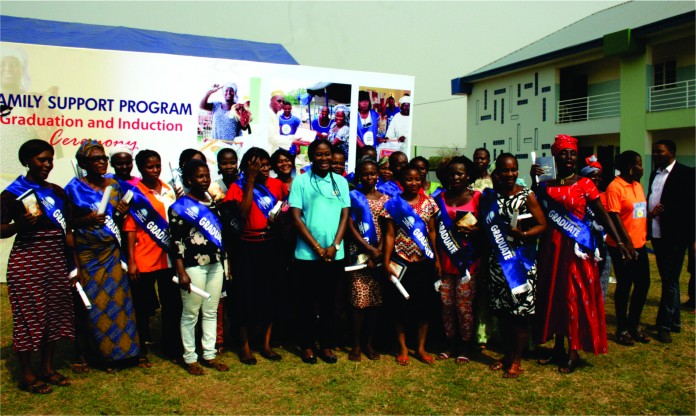 By FUNSO OMODELEOLA and OSIFO GODFREY

NO fewer than 70 adults graduated from the Family Support Program of the Inner City Mission for Children as 100 freshmen got inducted into the scheme on Thursday in Lagos.

“One of the key strategies to stem this tide is to empower their parents, especially as the first 1000 days of a child is very important to their survival,” she said.

According to her, the mission’s research has revealed that to break this vicious cycle of poverty, the parents require empowerment for economic self-reliance.
Among the beneficiaries of the scheme is Theresa Robinson, a Liberian married to a

Nigerian. With the intervention of the Family Support Program, Theresa has established a flourishing food canteen in Lagos.
According to her, she is now able to take care of her children.

The Family Adoption Unit of the scheme also enlisted Mr. Cosmas Ugwu, a Roman Catholic Church devotee, into the program which sheltered his family and took over the education and feeding of his children.

According to Ugwu, what his family encountered is a divine transformation; and the missing link in the family, which is the word of God, was eventually restored during the program.

Testifying, another beneficiary, Mrs. Debbie Johnson, said she was in a precarious situation before she was introduced to the Christ Embassy Family Support Program.

“My husband absconded from home leaving me with four children. I underwent a medical procedure to remove lumps from one of my breasts; flood swept away my building in the 2007 Ajegunle Ikorodu flood, while I was still at the hospital recuperating. Neigbhours had to take my children away with them.

“It was at this point that I was enlisted into the Family Support Program. The free food we were given helped me save my earnings as house cleaner and food vendor,” she said.

According to her, today, two of her children are university graduates, one is in polytechnic, while the last child will be writing his Secondary School Certificate Examination this year.

“What has been the greatest capacity building program for me is the word of God; that we were taught for the duration of the program,” she added.

Pastor Alabi enjoined the inductees and the alumni of the Family Support Program to maintain their new level of faith, encouraging them to exploit and conquer with the word of God.

Hundreds of Christian literatures by the best-selling author and President, Believers Loveworld, Pastor Chris Oyakhilome, including Rhapsody of Realities Devotional, Study Bible, and “Now That You Are Born Again” were handed out to the participants.
The ceremony was held at the expansive ultra-modern facility of the Inner City Mission located in Ikeja.