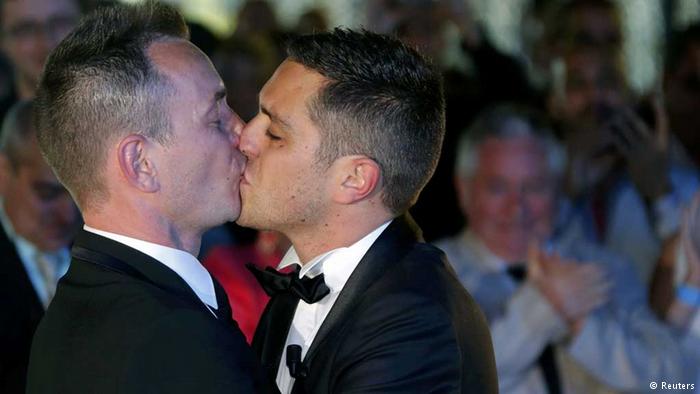 Share this on WhatsApp
Spread the love
By Ediale Kingsley
Nigerians have continued to pour out their remarks on legalising gay marriage. Germany’s parliament has voted on Friday(June 30) to legalise gay marriage after Chancellor Angela Merkel did an about-face that freed members of conservative party to vote their “conscience” rather than follow party lines.
Norbert Lammert, president of the parliament, said 393 lawmakers voted to approve the amendment, while 226 voted against and four abstained.
Merkel, who will seek a fourth term in a national election on Sept 24, said on Friday she voted against the Bill given her personal view that marriage should be between a man and a woman, but she hoped parliament’s approval of the measure would lead to more social cohesion.
“For me, marriage in the Basic Law is marriage between a man and a woman and that is why I did not vote in favour of this bill today,” she told reporters moments after the 393-266 vote in favour of an amendment that will legalise same-sex marriage.
“I hope that the vote today not only promotes respect between different opinions but also brings more social cohesion and peace,” she added. Many other European countries, including France, Britain and Spain, have already legalised same-sex marriage.

Nigeria recognizes neither same-sex marriages nor civil unions for same-sex couples. Homosexuality can land men up to 14 years in prison in Southern Nigeria and capital punishment for men in areas under Sharia Islamic Law. Proposals to constitutionally ban same-sex marriage compacted with severe penalties to those convicted of performing or participating in such, have twice surfaced. A similar bill is currently pending parliamentary approval and many hope that the recent surge of support to gay marriage by powerful nations like germany won’t sway decision to it’s favor.

On January 18, 2007 the Federal Executive Council approved a law, Same Sex Marriage (Prohibition) Act 2006, prohibiting same sex marriages and sent it to the National assembly for urgent action. According to the Minister of Justice, Chief Bayo Ojo, the law was pushed by President Olusegun Obasanjo following demonstrations for same sex marriage during the international conference on HIV/AIDS (ICASA) in 2005.

The proposed bill calls for five years imprisonment for anyone who undergoes, “performs, witnesses, aids, or abets” a same-sex marriage. It would also prohibit any display of a “same-sex amorous relationship” and adoption of children by gays or lesbians. The bill is expected to receive little or no opposition in Parliament. The same-sex marriage ban would make Nigeria the second country in Africa to criminalize such unions. In 2005, the Ugandan constitution was amended to ban same-sex marriage.

The same bill would also call for five years imprisonment for involvement in public advocacy or associations supporting the rights of lesbian and gay people. Included in the bill is a proposal to ban any form of relationship with a gay person. The intent of the bill is to ban anything remotely associated with being ‘gay’ or just gay in the country.

In February 2006, the United States State Department condemned the proposal. In March 2006, 16 international human rights groups signed a letter condemning the bill, calling it a violation of the freedoms of expression, association and assembly guaranteed by international law as well as by the African Charter on Human and Peoples’ Rights and a barrier to the struggle against the spread of AIDS. Some sources claim that Nigeria has the world’s third-highest population of persons with AIDS: 3.6 million Nigerians are infected with HIV.

In 2008, the Same Gender Marriage Prohibition bill came up before the Senate, the bill was passed in 2013 after a series of amendments. Nigeria is a homophobic nationand the passage of the bill received little opposition from the people. The bill voids marriage contracts between people of the same sex and persons aiding and abetting same sex marriages. However, there already existed a bill criminalizing homosexuality and questions were raised about the importance of the new bill. The major difference is that, the bill went further than the previous criminal and penal codes by prohibiting same sex marriages and actions aiding same sex unions by Nigerian citizens. Persons witnessing, officiating or supporting gay acts or weddings can be charged in court. The law is a way to use scare tactics to discourage same sex unions.