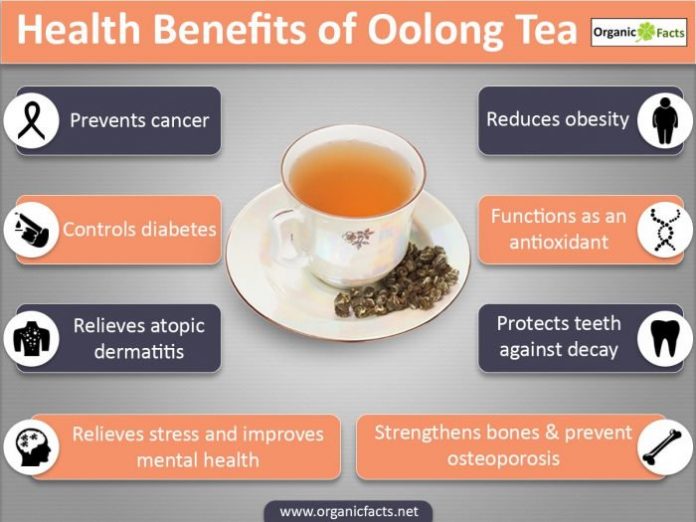 Health benefits of oolong tea include its ability to reduce chronic health conditions such as heart diseases, inflammatory disorders, and high cholesterol levels while providing vital antioxidants and promoting superior bone structure, robust skin, and good dental health. Oolong tea is fragrant with a pleasant aroma and has a fruity flavour. Despite its caffeine content, it is still a relaxing drink.

The health benefits of oolong tea are doubled because of the combined qualities of black tea and green tea. According to the Tea Association [1] of the United States, this tea falls somewhere between green and black teas, as its leaves are partially oxidized. There are numerous kinds of tea in this world, but oolong tea is one of the most beneficial.

The origin of oolong tea dates back almost 400 years when it found wide usage in China. It is a semi-green fermented tea, but the fermentation process is halted as soon as the tea leaves start to change their colour.

This tea is a natural gift that is rich in antioxidants. It also contains vital vitamins and minerals such as calcium, manganese, copper, carotin, selenium, potassium, and vitamin A, B, C, E, and vitamin K. Additionally, it contains folic acid, niacinamide, and other detoxifying alkaloids. It is developed in semi-fermented processing, which provides the tea with numerous polyphenolic compounds and adds even more valuable health benefits. Oolong tea also contains caffeine, theophylline, and theobromine (similar to caffeine), which on consumption, may stimulate the nervous system.

With so many health benefits and a relaxing effect it has for you, the inclusion of this tea in your diet is a great idea. Let’s have a look at the incredible benefits of oolong tea.

The polyphenolic compound found [2] in oolong tea is very effective in controlling the metabolism of fat in the body and reducing [3] obesity. It activates certain enzymes, thereby enhancing the functions of fat cells in the body and a daily consumption of this tea can reduce obesity. In one study, mice that were given polyphenols in addition to a high-fat and high-sugar diet still showed a decline in overall body weight and fat index. Some earlier studies actually showed that the caffeine content was an active ingredient for weight loss, but it now appears to be mainly due to the polyphenols. Apparently, the active components in oolong tea make fat work for you.

The polyphenolic compound in oolong tea is also responsible for the removal of free radicals in our body as it functions [4] as an antioxidant. Therefore, consuming daily doses of oolong tea can help people against the potential harm that these free-moving cells often pose to the body, including cancer, atherosclerosis, stroke, rheumatoid arthritis, neurodegeneration, and diabetes.

Oolong tea is rich in anti-cancer properties. Drinking it helps to significantly lower the risk of developing ovarian cancer in women.

According to scientific experiments, patients diagnosed with eczemacan benefit from drinking 3 cups of oolong tea throughout the day. The beneficial results of this tea can be seen in less than a week and these patients will show remarkable improvement in recovering from skin problems. In a 2001 study [5], 54% of test subjects were found to show positive, long-lasting results in terms of skin conditions after 6 months of daily intake of oolong tea.

Although the active mechanism has not been pinpointed exactly, many believe that the polyphenols present in oolong tea also work as anti-allergenic compounds, thereby relieving irritation and chronic skin problems like atopic dermatitis. 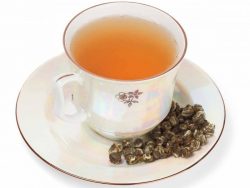 The antioxidants present in oolong tea protect teeth against decay, strengthen the bone structure, prevent osteoporosis, and promote normal, healthy growth of the human body. A number of studies have analyzed the long-term effects of drinking this tea, particularly [6] on bone mineral density (BMD). They showed that people who consistently drank black or oolong tea for more than 10 years were less likely to lose their bone mineral density over that span of time. It is thought that some of the components in this tea actually stimulate the retention of minerals from other foods that we consume.

Oolong tea is used as an herbal brew for treating type-2 diabetic disorders and as an addition to other supplementary drugs for treating the disease. It regulates the amount of blood sugar and insulin in the bloodstream, so the dangerous dips and spikes in blood sugar that can be disastrous for diabetics are reduced. A 2003 study showed [7] that when combined with regular hyperglycemic drugs, oolong tea further balanced the blood sugar levels and prevented sudden drops in almost all of the test subjects.

It is a well-known fact that tea drinkers have a lower risk of getting skin cancer. Moreover, the polyphenolic compound in oolong tea promotes apoptosis in case of cancerous cell growth in the stomach. This polyphenolic extract also acts as a chemo-preventive instrument against the development [8] of other cancers as well. The compounds stifle the activation of carcinogenic cells, prevent the formation of N-nitroso compounds, and trap genotoxic agents before they can become effective.

In a detailed study conducted at the Osaka Institute for Health Care Science in Japan, the experimental mice in which oolong tea was ingested, showed a remarkable improvement in the stress levels by 10 to 18 %. The natural polyphenols in oolong tea were cited as the main cause of it being a stress-buster. Also, the L-theanine found in tea leaves is an amino acid that blocks L-glutamic acid to glutamate receptors in the brain. This normally causes cortical neuron excitement, which leads to an increased cognitive activity and neural stress responses. Since this amino acid binds to those sites, excitation doesn’t occur, and stress decreases [9] because you are able to keep your mind at rest.

Word of Caution: Despite all of these important effects, it is important to remember that oolong tea tends to be high in caffeine, which is not the healthiest component of this beneficial beverage. Caffeine affects people differently and some of the side effects of excess caffeine are anxiousness, headache, sleeplessness, diarrhea, heartburn, irregular heartbeat, and confusion.

More serious conditions that can be exacerbated by too much caffeine intake are diabetes, heart conditions, anxiety disorders, irritable bowel syndrome, and high blood pressure. Also, drinking too much oolong tea can actually sweep out excess calcium that your body is processing. For patients with osteoporosis, this can speed up bone degradation, even though other elements of oolong tea are helpful for this condition. It is best to use it as a preventive method for bone problems, rather than a treatment.

In other words, drink several cups of oolong tea a day, because it might be the best kind of tea for improving your health and in addition to being a delicious and relaxing treat. That being said, be aware that caffeine is a powerful chemical, and monitor your body’s response to this change in your diet, just as you should with all new foods and nutritional sources.