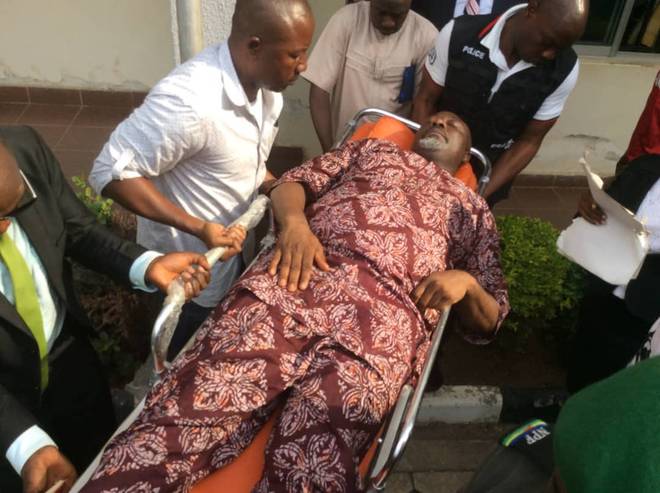 The Kogi West senator was brought in on a stretcher before a Magistrate’s Court in Wuse Zone 2, Abuja amid heavy security.

In the First Information Report the police filed against him, the senator was accused of intentionally breaking the side windscreen of the bus conveying him and jumped out from it.

Presiding Magistrate Mabel Segun-Bello granted him bail in the sum of N90 million.

Although he met his bail condition, according to his lawyer Nkem Okoro, Melaye was re-arrested right on the court premises.

“The police decided to re-arrest him on the excuse that they were taking him to Lokoja tomorrow morning,” Okoro said.

Hundreds of policemen were deployed to the court, in a heavy convoy comprising pick-up vans, an ambulance, buses, all packed with armed police men.

Melaye travail began in February when a gang of armed men arrested in Kogi confessed the senator armed them with guns, and gave them N400,000.

Police authorities say he refused to honour police invitation, leading to a 20-hour siege on his Abuja home last week.

The Kogi West senator later surrendered, and was about to be whisked to Lokoja when he attempted to break out of custody.

He has since been admitted to the National Hospital in Abuja to treat injuries sustained in the attempt.

His colleagues at the Senate has been inviting IGP Ibrahim Idris to come and explain what the police is on about in the matter.

But for the second time, Idris has shaken off the invitation.