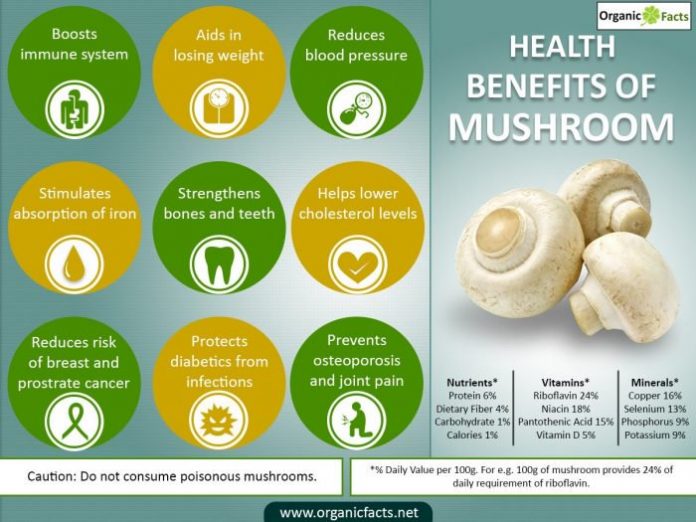 The health benefits of mushrooms include relief from high cholesterol levels, breast cancer, prostate cancer, and diabetes. They also help in weight loss and increase the strength of your immune system.

Almost all of us are familiar with mushrooms and their miraculous, beneficial powers. Particularly those who have read or heard a lot of fairy-tales such as Alice in Wonderland, Three Bears, and a baby or even those who have played the Super Mario Brothers video game.

You have probably seen mushrooms making someone bigger or acting as a shield against some dangerous monster. These aren’t just popular culture references, they are actually symbolic representations of the actual health benefits of mushrooms. They truly can make you bigger and protect you against diseases and infections, as they are full of proteins, vitamins, minerals, amino acids, antibiotics, and antioxidants.

Mushrooms are edible fungi with various scientific names and their family name is “Agaricus”. They are essentially Saprophytes, the organisms (plants without chlorophyll) which thrive by extracting nutrients from dead and decaying plant and animal matter. They vary greatly in their color, texture, shape, and properties.

There are approximately 140,000 species of mushroom-forming fungi in the world, but science is only familiar with about 10%, while only 100 species or so are being studied for their potential health benefits and medicinal applications.

Health benefits of mushrooms are abundant and so let us discuss them in detail below.

Mushrooms provide you with lean proteins since they have no cholesterol or fat and have very low carbohydrates. The fiber and certain enzymes in them also help to lower cholesterol levels. Moreover, the high lean protein content found in them helps burn cholesterol when they are digested. Balancing levels of cholesterol between LDL or bad cholesterol and HDL or good cholesterol is essential in the prevention of various cardiovascular diseases like atherosclerosis, heart attack, and stroke.

Anaemic patients are characterized by having low levels of iron in their blood, resulting in fatigue, headaches, reduced neural function, and digestive issues. Mushrooms are a good source of iron, and over 90% of the nutritive iron value can be absorbed by the body, which promotes the formation of red blood cells and keeps people healthy and functioning at their full potential.

Mushrooms are very effective in preventing breast and prostate cancer due to the significant presence of beta-glucans and conjugated linoleic acid, which both have anti-carcinogenic effects. Out of these two, linoleic acid is particularly helpful in suppressing the harmful effects of excess estrogen. This increase in estrogen is one of the prime causes of breast cancer in women after menopause. The beta-glucans, on the other hand, inhibit the growth of cancerous cells in cases of prostate cancer, and numerous studies have shown the antitumor properties of mushrooms when applied medicinally.

Mushrooms are an ideal low-energy diet for diabetics. They have no fats, no cholesterol, very low levels of carbohydrates, high protein content, and a wealth of vitamins and minerals. They also contain a lot of water and fiber. Moreover, they contain natural insulin and enzymes which help the breaking down of sugar or starch in food. They are also known to contain certain compounds which help proper functioning of the liver, pancreas and other endocrine glands, thereby promoting the formation of insulin and its proper regulation throughout the body. Diabetics often suffer from infections, particularly in their limbs, which tend to continue for long periods of time. The natural antibiotics in them can help protect diabetics from these painful and potentially life-threatening conditions. 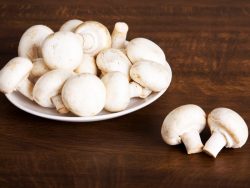 Mushrooms are a rich source of calcium, which is an essential nutrient in the formation and strengthening of bones. A steady supply of calcium in the diet can reduce your chances of developing conditions like osteoporosis, and can also reduce joint pain and general lack of mobility that is associated with bone degradation.

Vitamin D is a relatively rare vitamin to find in vegetables, and in fact, its edible forms, are not particularly common. However, mushrooms have it, and this essential vitamin can facilitate the absorption and metabolism of calcium and phosphorous. Calcium and phosphorus are also present in good amounts in mushroom, so the combined effects of having all of these nutrients make them a good idea to eat whenever possible.

Ergothioneine, a powerful antioxidant present in mushrooms, is very effective in providing protection from free radicals as well as boosting the immune system. It is actually an amino acid that contains sulfur, which is something that many people are deficient in, despite not knowing it or seeing its effects. That being said, the presence of this “master antioxidant” which is unique to mushrooms, can give a major boost to your immune system health. Ergothioneine helps eliminate free radicals, which are dangerous compounds released during the metabolic processes of cells, and can float throughout the body and cause significant damage and diseases.

Mushrooms contain natural antibiotics (similar to penicillin), which inhibit microbial growth and other fungal infections. These same polysaccharides, beta-glucans, can stimulate and regulate the body’s immune system. They can also help heal ulcers and ulcerous wounds and protect them from developing infections. The good combination of vitamin A, B-complex, and C that is found in them also strengthens the immune system.

Studies of various types of mushrooms, including shiitake and maitake mushrooms, have shown them to be high in potassium content. Potassium acts as a vasodilator, relaxing tension in blood vessels and, therefore, reducing blood pressure. High blood pressure is connected to a number of deadly conditions, particularly heart attacks and strokes. Potassium also increases cognitive function, because increased blood and oxygen flow to the brain stimulates neural activity. Studies have shown that increased levels of potassium improve memory and knowledge retention.

Copper has a number of beneficial effects on the body and can be found in mushrooms. Copper can regulate and stimulate the absorption of iron from food, and properly utilize it by getting it released from primary storage spots in the body like the liver. Mushrooms also have high levels of iron, so the two work together for healthy bones and also prevent anaemia.

The selenium content in mushrooms is one of its most beneficial elements that is often overlooked. The primary source of selenium is in animal proteins; however, due to their classification as fungi that feed on animal and plant matter, mushrooms are the best way for vegetarians to obtain the necessary amount of selenium. Selenium is found in large quantities in mushrooms and can benefit bone health by adding to the bone strength and increased durability. It also strengthens the teeth, hair, and nails. Furthermore, this essential nutrient is a powerful antioxidant, which rids the body of free radicals and generally strengthens the immune system. The bioavailability of selenium in mushrooms differs from one species to another, but the majority of commonly consumed mushrooms have significant levels of this important mineral.

Would you believe me if I said that a completely lean protein diet is ideal for losing fat and building muscle mass? Well, believe it or not, it’s true. Most fats are burnt to digest proteins found in our food, more so when the protein is accompanied by a very low carbohydrate count, no fat or cholesterol, and a good amount of fiber. This is exactly the combination that mushrooms offer to help in losing weight! Due to their nutrient density, they actually rank higher than most fruits and vegetables, and some researchers say that mushrooms are one of the rare foods that people can eat as often as possible, with no side effects.

One study replaced red meat with white button cap mushrooms, approximately one cup per day, and found that those test subjects who ate these not only lost a significant amount of weight over a standard period of time, but they also decreased their waistline, and were better able to maintain their new weight, rather than ballooning back to the original weight as in most crash diets.

Word of Caution: On a serious note, mushrooms can be very dangerous! Most species of mushrooms are not edible, are highly poisonous and look strikingly similar to their edible counterparts. Don’t ever try picking them for consumption from the woods unless you have been trained to identify them very well. Mushrooms have the unique ability to absorb the material that they grow on, either good or bad. This quality is what gives them so much of their beneficial power, but also their dangerous aspects. Many mushrooms, when picked in the wild, contain heavy metals, which can be very toxic, as well as air and water pollutants.

Also, do not trust any unknown vendors when you buy mushrooms. Always trust sealed products from reputable companies or those which you have grown yourself under controlled conditions after buying their seeds (called spawns) from a trusted source. A single poisonous mushroom among others in a dish can threaten a large amount of people’s health, resulting in comas, severe poison symptoms, nausea, vomiting, convulsions, cramps, and insanity. Many species can even be fatal if ingested.  Always avoid eating discolored ones or those which are different in color than the typically accepted color of their species. 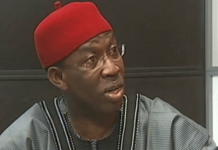 Pressure on Okowa 7 days after, as Delta youths mobilize for war with Fulani jihadists