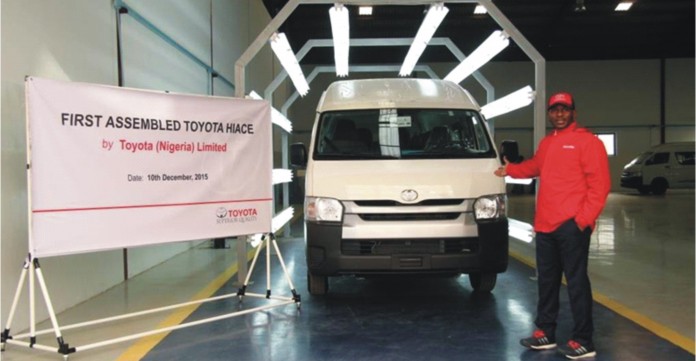 TOYOTA Nigeria Limited, Nigeria’s main distributor of Toyota brand of vehicles has said it is in the final process of unveiling a multi-billion naira assembly plant in Nigeria.

Managing Director of the company, Mr. Kunle Ade-Ojo stated this recently at a special press briefing at the company’s head office in Lekki. According to him, the plant situated at Ikotun area of Lagos has already completed a test-run of the plant with the assembling of the Toyota Hiace bus on the 10th of December, 2015.

While unveiling the assembled bus to motoring journalists, Mr. Ade-Ojo said the plant which would begin mass assembling soon could handle 20,000 to 30,000 cars, adding that the plant is a two-line assembly plant with enough room for expansion if the need arises.

Mr. Ade-Ojo also explained that the company is starting a special campaign for owners of the Toyota RAV4 made between 2006 and 2012 to bring in their vehicles for a minor seatbelt adjustment setting.

He said Toyota Motor Corporation has discovered that there is the need to fit a rubber resin to the base of the two frontal seats where seat belts are attached because of friction that could lead to tears of the belts. According to him, the rubber resin would protect the friction between the belt and the steel holder.

He said with Toyota’s commitment to the safety of its customers it has decided to fit about 900 vehicles that are affected in Nigeria. He therefore called owners of RAV4 made between 2006 and 2012 to bring in their vehicles for the special service campaign.

“Toyota is committed totally to the safety of its customers, and whenever we discovered new means of reinforcing such commitment, we do not hesitate to implement them,” Ade- Ojo explained.

He however cautioned that only vehicles bought from Toyota Nigeria Limited and its numerous dealers across the country would enjoy this benefit. The fitting of the rubber resin will take between one and two hours at no cost to the owner.