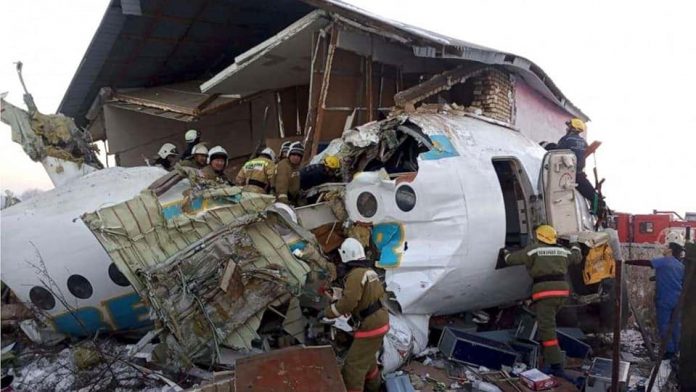 The Christmas celebration did not go without disaster. A plane crash claimed the lives of 15 persons on a journey embarked by 98 persons on board in the early hours of Friday.

Reports indicate that about 15 persons on board an aircraft conveying 98 passengers, including five crew members on board, died after the plane crashed while taking off from an airport in Kazakhstan on Friday, December 27.

AP report indicated that about 66 onboard the Bek Airplane with flight number Z92100 survived the crash with injuries, 50 of whom were hospitalized. Airport officials were said to have disclosed that 22 of the victims are in “extremely severe” condition.

Kazakhstan’s Civil Aviation Committee was said to have narrated that the aircraft which was heading to Nur-Sultan on a pre-dawn flight from Almaty, Kazakhstan’s largest city “lost altitude during takeoff and broke through a concrete fence” before hitting a two-storey building.

A survivor had told News website Tengrinews she heard a “terrifying sound” before the plane started losing altitude.

“The plane was flying with a tilt. Everything was like in a movie: screaming, shouting, people crying,” she said.

Another survivor, Aslan Nazaraliyev, a businessman, told the Vremya newspaper the plane started shaking while gaining altitude about two minutes after takeoff.

“At some point we started falling, not vertically, but at an angle. It seemed like control over the plane was lost,” he said.