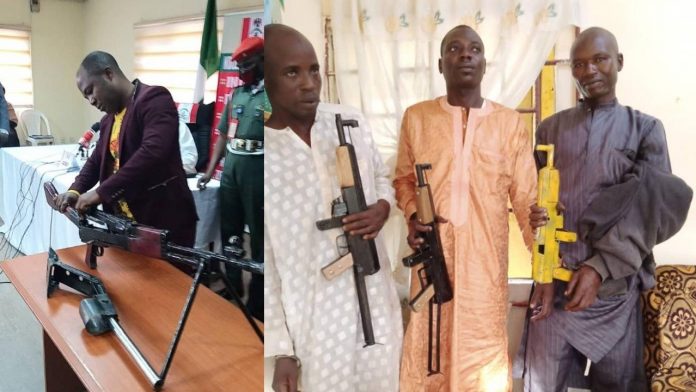 Adamu Shehu, Tukur Mohammed and Ibrahim Suleiman—all armed bandits—were on setting out for their evil mission when they ran into men of the NDLEA in Katsina.

On the other side, in Benue, a heavy weapon manufacturer Celestine Chidiebere, was also unlucky. The NDLEA arrested him while he tried to move  a high calibre G3 rifle, seventy-eight (78) rounds of life ammunition (RLA) of 7.62mm calibre and five empty shells to Jos.

The agency made the arrest at checkpoints set up from drug mules in the states.

Mohamed Buba Marwa (Retd), the Chief Executive Officer of NDLEA said the body will continue to support efforts by other security agencies, especially the armed forces, to restore law and order across the country.

“For us at NDLEA, we’ll continue to do our best with our highly dedicated officers and men to cut off accessibility to illicit drugs by criminal gangs by blocking the trafficking of these psychoactive and psychotropic substances,’ he said in Abuja while the agency handed over the cache.

”In doing this, we’ll not shy away from complementing the efforts of other security agencies, especially our armed forces in our collective bid to restore security and maintain law and order in all parts of the country.”

Marwa has been warning Nigeria of the connection between banditry and drug abuse which he insists portend worse insecurity for he country.