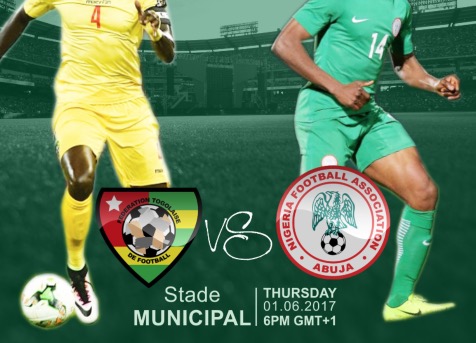 Share this on WhatsApp
Spread the love
By Ediale Kingsley
Come June 10, Nigeria will battle South Africa in Uyo at the Godswill Akpabio Stadium. Tunisia’s Youssef Essrayri has been appointed as the referee for the Africa Cup of Nations qualifier.
The Super Eagles just touched down Nigeria after a good training/friendly match against Togo. But while we await the mouthwatering fixture, let’s note what to expect. As we analyse just concluded Togo match.
1. Musa had a brace. His first came at the 3rd min(he calmly netted the ball after a great job by Iwobi). The 2nd came at the 17th min and it wasn’t a solo job either. Iwobi, again made the helpful assist. The way he scored both goals explains my argument for him in his plight so far at Leicester City.
2. At 27th min. Etebo did the needful. Something Africans must learn fast from Europe. Something he has learnt from playing in Europe. He stole the ball from goalkeeper Alassani and served Kelechi. And we could easily say the young striker appreciated the meal. Cos he took it with both hands (sorry, legs).
3. Coach Rohr is showing good signals. Aside the fact that he’s been unbeaten since he took the Super Eagle’s job, he therapeutically advances with the team and challenge. For instance, he’s engineered the attacking squad and that’s fixed the goal drought. 3 goals before the 30th min against an African side is impressive. Make no mistake, this was a tougher side compared to Corsica.
4. It’s a friendly training program with a purpose. And a good coach doesn’t get carried away. The players invited needed to blend and be tested. So check how the substitution program went:
46min:
Musa, Abdullahi out, Osimhen, Ebuehi in.
59th min:
Etebo, Ndidi out, Agbo, Onyekuru in.
70th min:
Iwobi, Iheanacho, Ezenwa out, Olanrewaju, Olatunbosun, Alampasu in.
85th min:
Agu out, Alhassan in.
87th min:
Echiejile out, Odey in.
The deal here for me is in the way we could steady the game. After and during all these number of subs. It was 3-0 before the subs and remained that even after the subs. That’s awesome…now, I don’t know if it’s a fluke. But If it’s no fluke then I think Rohr will be the best Coach Nigeria ever had.
Share this on WhatsApp
Related Topics:friendly matchnigeriaSuper EaglesTogo
Up Next