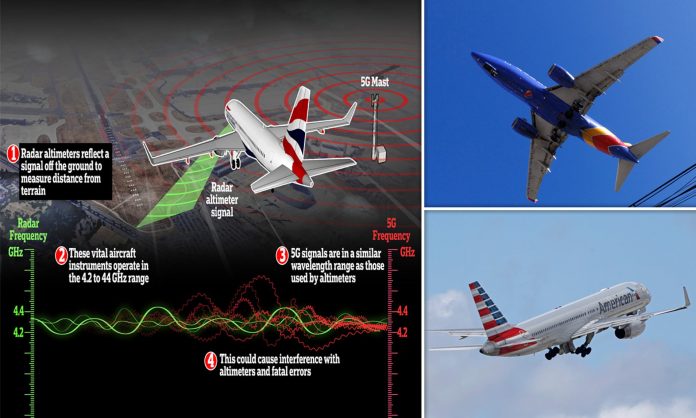 The chief executive officers (CEOs) of some of the United States’ largest airlines have raised the alarm on a potential “catastrophic disruption” in the aviation industry if telecoms companies launch 5G services on Wednesday.

In a letter sent to senior officials in the Biden administration on Monday, they warned that thousands of aircraft could be grounded, causing commerce to “grind to a halt” with Americans stranded overseas if 5G is switched on near airport runways.

The airlines urged US officials to delay deployment of the service within two miles of affected airport runways.

AT&T and Verizon have already twice delayed the launch of their new C-Band 5G service due to warnings from airlines and airplane manufacturers concerned that the new system might interfere with their ability to gauge altitude.

“We are writing with urgency to request that 5G be implemented everywhere in the country except within the approximate two miles of airport runways as defined by the FAA on January 19, 2022,” the letter reads.

The CEOs highlighted the risk of “economic calamity” should Verizon and AT&T proceed as planned with implementing the technology before the necessary upgrades and changes have been made to aviation equipment.

They warned that disruptions to airplanes’ instruments could ground “huge swaths” of the US fleet, subjecting more than 1,100 flights and 100,000 passengers to cancellations, diversions or delays.

“The ripple effects across both passenger and cargo operations, our workforce and the broader economy are incalculable. Every one of the passenger and cargo carriers will be struggling to get people, shipments, planes and crews where they need to be. To be blunt, the nation’s commerce will grind to a halt,” they added.

On Sunday, the FAA said it had cleared an estimated 45 percent of the U.S. commercial fleet to perform low-visibility landings at airports where the new 5G service would be deployed.

But the airlines are concerned that remaining limitations at those airports, as well as a large amount of uncertified equipment, could lead to the grounding of thousands of flights.