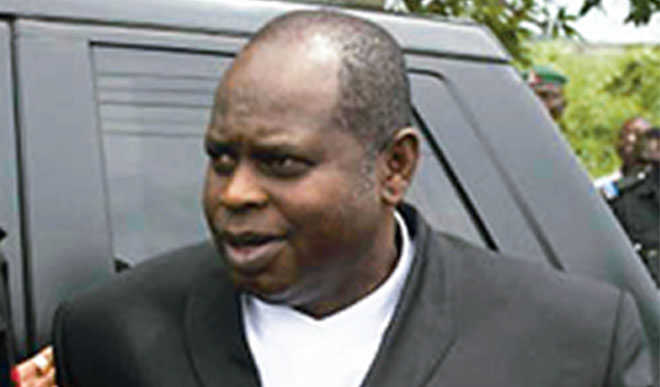 A High Court, sitting in Yenagoa, Bayelsa State, will require the ghost of late former Governor of Bayelsa State, DSP Alamieyeseigha, to appear before it to answer to a case of acquiring 7.5 hectares of land belonging to the Adugotu Family of Opolo, Yenagoa, using a fake company, Pescal Nigeria Limited.

Findings show that at the current rate, the value of the land has shot up to well over N1.1 billion. The land in controversy is located at the junction of Commissioners Quarters Road and Isaac Boro Expressway opposite the headquarters of the Joint Task Force (JTF) Operation Pulo Shield.

The plaintiffs are asking for a declaration that the taking over of the land by the defendants and the allocation of same to “Pescal Nigeria Limited, an ally of the second defendant, is not in overriding public interest envisaged by law.”

They further urge the court for an order of perpetual injunction restraining the defendants by themselves, their agents, servants and privies from disturbing the claimants in their use, ownership and possession of the land.

In a written statement on oath by one Diewulu Harold, stated that a search at the Corporate Affairs Commission (CAC) in Abuja revealed that Pescal Nigeria Limited is not registered or incorporated in Nigeria.

Harold also gave a historical background of the land in the written statement and that the land was allocated to members of the family for building of homes and farming before it was taken over by the defendants.

He also averred that the land in question has now been apportioned to food vendors and other artisans by officials of the company who also receive rent on the land which was surveyed with plan number YE.46 Tracing No: BS.88.

Harold said in the statement that the purpose for which the land is being used is not in the overriding public interest and that the taking over of the land without payment of adequate compensation is “unconstitutional, illegal, null and void.”

He also averred that Alamieyeseigha used his position as governor to take over the land from the claimants and allocate it to himself in the name of Pescal Nigeria Limited.

Meanwhile, in their preliminary objection, the defendants said “That in view of the facts of this case as disclosed in the pleadings, this suit is statute-barred and thus this court lacks the requisite jurisdiction to entertain, hear and determine same” as the claimants waited for over 15 years before going to court.

But the claimants have vowed to pursue the matter until justice is done as according to them, the acquisition of the land or as they preferred to put it, taking over of the land is unconstitutional as while the state government said it was for overriding public interest, the late governor used his position to allocate the same land to himself.