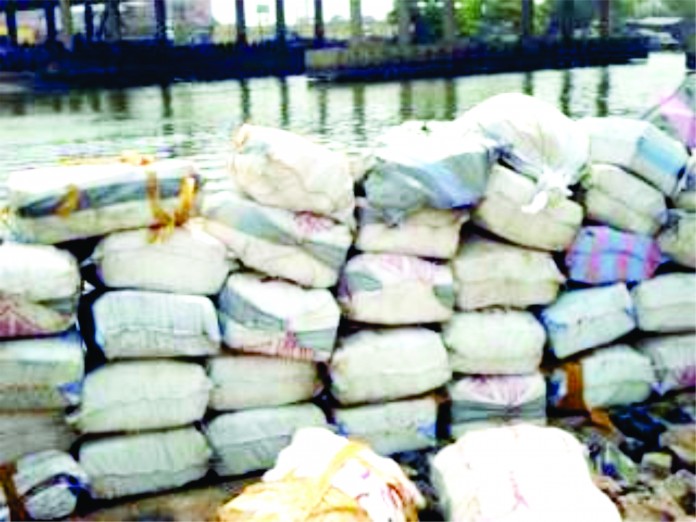 EFFORTS to rid the country of illicit drug use was further given a boost as the Western Marine Command of the Nigeria Customs, intercepted substances suspected to be Indian hemp weighting 4, 500kg with market value put at over N150, 000, 000 million.

The Customs Area Controller, Western Marine Command, Comptroller, Yusuf Umar while handing over the substances to the Lagos State NDLEA Commander Alhaji Sule Aliyu said the interception took place about 0005hrs on the 9th February, 2016 along Igbo-Ojanla near Badagry.

Obviously elated at the huge seizure, praised the men and officers under his command that in tandem with their capable Customs Investigation Unit operatives made the seizure of forty-eight bales of cannabis possible.

Umar, who also used the opportunity to highlight some of the achievements recorded in the previous year coupled with the sad incident narrated how his men who were carrying out their statutory functions, were attacked by smugglers, cutting them with machete on their heads, limbs and other parts of their bodies.

He noted that given the circumstances of inadequate equipment to navigate the water ways, yet the command have proceeded to achieve this feat stressing that he is optimistic that with this news getting to the notice of the CGC, all the demands they presented to him when he visited the command recently will be acceded to.

Eporwei call on the members of the public to stop patronizing those who indulge in trafficking hard drugs even as he emphasized on the damage it does to the health of those who are addicted to hard drugs.

In his contribution, the Lagos State NDLEA Commander Alhaji Sule Aliyu thanked the Customs for the concerted efforts its various commands are putting into the volatile war against smuggling and most especially against drugs that are offensive to the law.
He assured the general public that with synergy that now exist within all security agencies, the sordid affairs of smugglers will be reduced to its barest minimum.