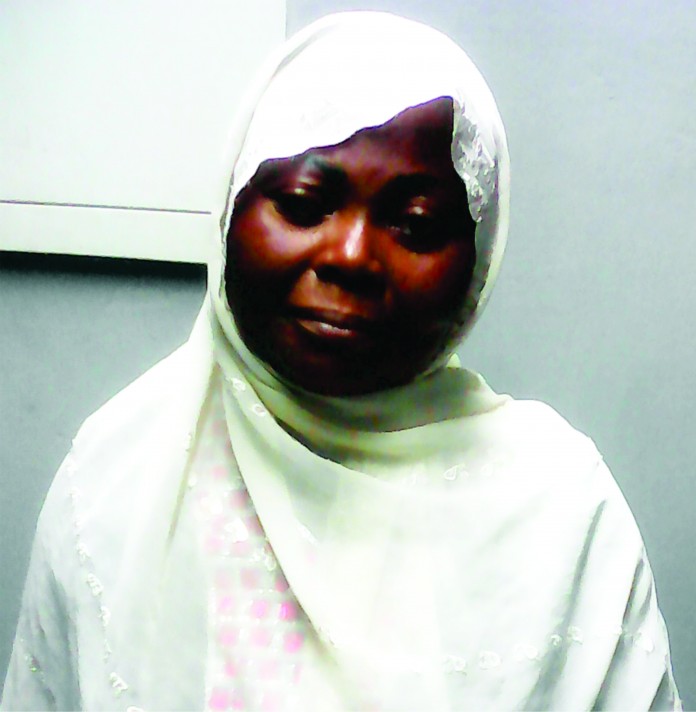 A 48 year-old mother of three, Mrs. Saidat Bola Hassan, gave passengers at the Nnamdi Azikiwe International Airport (NAIA) Abuja on Friday the shock of their lives as she presented a mild drama when she allegedly vomited 15 wraps of white powdery substances that tested positive for cocaine.

The incident took place at the central screening section of the departure hall on an Egypt Airline flight to Jedda, Saudi Arabia en-route Cairo. She was immediately apprehended by officers of the National Drug Law Enforcement Agency (NDLEA) who discovered that she had ingested 80 wraps of cocaine weighing 904 grammes.

NDLEA Abuja airport commander Mr. Hamisu Lawan said that efforts were made to protect her from any harm resulting from drug ingestion. “As soon as we discovered that the suspected wraps she vomited tested positive for cocaine, we took measures to ensure her safety by preventing any harm that may result from drug ingestion.

While under observation, she excreted 65 similar wraps. In all, she ingested 80 wraps of cocaine weighing 904 grammes; her case is under investigation” Hamisu stated.

Mrs. Saidat Bola Hassan, a native of Idiroko, Ogun State who resides in Lagos Island claimed to be a business woman dealing in clothing materials said, “I am a business woman and I sell women clothes at Balogun market. I used to buy my goods from Ghana.

I was introduced into the drug business by a friend and business partner. The drug was brought from Abidjan, Ivory Coast and we were to share the proceeds equally. Until my arrest, I never knew that the cocaine I ingested would have led to my death in Saudi Arabia. I thank God for keeping me alive”.

The Chairman of the NDLEA, Col. Mohammad Mustapha Abdallah (rtd) who expressed satisfaction with her arrest said that her action negates every principle of good parenting.

“This is gross ineptitude on the part of a mother saddled with the responsibility of nurturing her children into future leaders.

“I am glad that she did not die from drug ingestion and she is alive to face trial. Besides escaping the risk of swallowing cocaine, this arrest also saved her because drug trafficking in Saudi Arabia is punishable by death. She will soon be charged to court because the law must run its full course. I expect the general public to learn lessons from this case that drug trafficking leads to pain, ignominy and untimely death”.

The NDLEA boss added that “my approach to drug control is both pragmatic and scientific.

Every action taken must be based on best global principles while lessons learnt will influence our implementation strategies in our day to day operations. The Agency will continue to sensitize members of the public by presenting facts and figures of drug trafficking as well as the larger picture of its ruin and devastation”.

It will be recalled that a female drug trafficker, Ifeoma Daniel Joy a native of Ukwa in Ukwa Local Government Area of Abia State who vomited wraps of cocaine at the departure hall of the Murtala Muhammed International Airport Ikeja, Lagos later died as a result of cocaine bust in 2007. Joy, aged 29, was said to have died after one of the wraps of drugs she ingested burst while preparing to board an Ethiopian airline heading for Dubai, United Arab Emirates. She had ingested 79 wraps of substances that tested positive for cocaine with a weight of 1.32 kilogrammes.