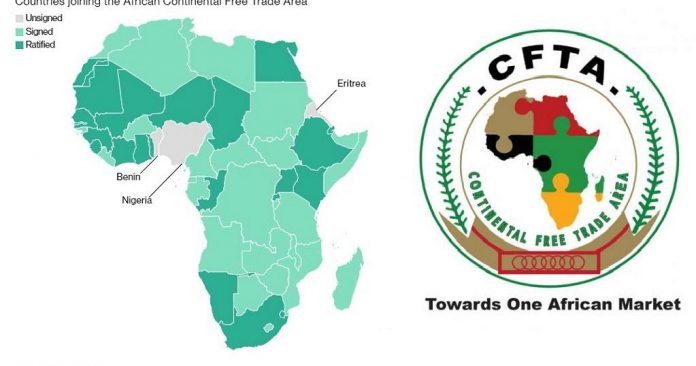 Given the fanfare, publicity blitz and diplomatic razzmatazz that surrounded the inauguration of the African Continental Free Trade Agreement (AfCFTA) about a year ago, it is most apposite to evaluate the journey of the continental body that was to revolutionize intra-African trade in no time. Specifically, the continental body comprising 54 out of 55 members of the African Union (AU) with an estimated population of 1.3 Billion, officially came into existence on January 1, 2021.

The AfCFTA aims to create a single market for goods and services in order to deepen economic integration of Africa, and is projected to generate a combined gross domestic product (GDP) of about US$3.4 trillion. The agreement was brokered by the African Union (AU) in response to a growing realisation that trade integration across the African continent has long been limited by outdated border and transport infrastructure and a patchwork of differing regulationsacross dozens of markets.

However, despite the ratification of the trade deal with palpable glee by most African countries (except Eritrea), the political will to implement it remains in doubt going by the pace and protectionist stance and policies of many African governments. Indeed, apart from locating and setting up the headquarters of the AfCFTA in Accra, Ghana, primordial centrifugal forces tugging at the unity of the continent have been more at play than ever before. It is ironic that although preparations towards the take-off of the Agreement lasted long, the onset of the global pandemic in 2020 almost halted the plan.

The novel Coronavirus which caused disruptions in global supply chains that lingered almost all through 2021, limited AfCFTA’s potential, as manufacturers of all hues across the continent suffered poor access to raw materials and to existing markets, forcing them to look inwards and explore new trade routes. Indeed, Covid-19, though a public health issue, virtually stalled globalization; fostered protectionism, economic nationalism and near-autarchic practices in not a few jurisdictions.

In point of fact, given the traditional trade links and linkages of most African countries, they preoccupied themselves with the rudimentary strategies of how to really ‘join the AfCFTA bandwagon’. Most countries including Nigeria were still dealing with lack of consensus on trade protocols; and could only commence the process of classification and re-classification of their products into ‘sensitive’ and ‘non-sensitive’ items and the timelines for full and/partial tariff removal on them.

However, for many African nations, some critical challenges in keying into the AfCFTAdrive are structural and infrastructural weaknesses; defects that have for long dwarfed their industrialization efforts. Highlighting this long-standing hurdle, Secretary General of the World Trade Organization (WTO), Dr Ngizi Okonjo-Iweala, stressed during the Financial Times’s Africa Summit in November 2021 on the need for infrastructure connecting countries on the continent to improve, and pave the way for effective supply chains across Africa. “One of the ways we can have a smooth functioning of markets is to have borders that are very easy to cross, and this needs a lot of investment,” she said.

Okonjo-Iweala said there was also a need for a resurgence in manufacturing in Africa following a period of long decline, in order to provide jobs for the continent’s growing youth population, which would harmonise well with the implementation of the AfCFTA. “My dream is that we can have — [in] pharmaceuticals for instance — an ecosystem of production on the continent, where some countries will make some inputs, others will make [more inputs], and others will finish the product.” But truly, a year down the line, these lofty dreams are yet unmet.

Unsurprisingly, too, not much progress has been made with respect to negotiations on rules of origin (RoO) to help determine the source(s) of goods being exported — a vital part of any free-trade area. Most African countries have for ages served as ‘dumping grounds’ for all manner of goods produced across the globe. Thus, even with the AfCFTA euphoria, the critical hurdle of RoO is yet to be crossed. Many African countries have essentially remained transhipment centres, adding little or nothing to the industrial growth of the continent. Although one year (of AfCFTA) is too short a time to get this scenario altered, the bitter truth is that most African countries, overtly or covertly are still tied to the whims and caprices of their (former) colonial Masters. So, rather than trade with their fellow African countries, they will do only the bidding of their colonial overlords, by serving as mere receptacles for products from the metropolis.

This umbilical attachment is best illustrated by the overt move by Francophone West African countries (on the eve of AfCFTA launch) and France to quickly adopt ‘Eco’ common currency. This ‘deft’ move spearheaded by Emmanuel Macron-French Government in cahoots with the Government in Abidjan was to torpedo the long-hatched plan of the entire membership of the Economic Community of West African States (ECOWAS) to create and adopt the ‘Eco’. Although the disruptive diplomatic tensionand whirlwind generated by France and its West African Francophone allies to ‘double cross’ the entire ECOWAS have simmered down, the import of the lessons are yet lingering. Whether AfCFTA can effectively eliminate the separatist or divisive omen of the ‘Eco’ debacle is yet to be seen.

It must be recalled that in 2018, African Heads of State adopted the protocol relating to the free movement of persons, right of residence, and right of establishment to enable Africans to freely move and work within Africa. Four years down the line, this protocol is observed more in breach: there is neither free movement of persons nor right of residence. Xenophobic attacks on citizens of Africa in African countries are, more than ever before, on the increase. Citizens of the ‘Giant of Africa’, Nigeria, seem to be the worst victims—whether in South Africa, Ghana, Libya or Sudan, Nigerians and their livelihoods are serially being attacked. And yet the AfCFTA singsong keeps gaining crescendo. More than anything else, this scenario clearly shows that AfCFTA is yet to effectively deal with many foundational issues.

Today, according to the World Economic Forum, African countries still trade more internationally than with one another. Intra-African trade, WEF says, accounts for about 16 per cent of African exports, which is very low compared to 60 per cent for Asia and about 70 per cent for Europe. Again, this minuscule intra-African trade share vividly reflects the negative effect of ongoing ‘Africa recolonization’. As the initiators and proponents of AfCFTA are dilly-dallying in effectively getting the body off the ground, it has become fashionable in recent years to link Africa simply as a bloc with the developed regions of the world.

All one hears often these days are: French-Africa Economic Summit; China-Africa Business Summit; European Union-Africa Conference; German-African Trade Conference, British-Africa Economic Summit, etc. Incidentally, all these confabs are held at the headquarters of these ‘Economic Super Powers’; and at such meetings, the hosts define or redefine the apron strings with which to tether the ‘Africa bloc’ interminably.

The ravaging Coronavirus pandemic has in the past two years further impoverished most already poor African countries, who now literally live on the crumbs from their colonial overlords. When the pandemic really became a palpable threat to the human race, the developed economies commenced producing vaccines only for their citizens. Some of the rich countries placed embargo on the export of such vaccines to Africa. It was only after a lot of clamour by many humanitarian and human rights organizations that some packs of the vaccines (some, inferior or fake) were allowed to trickle down to African countries.

So, in the face of this very challenging reality, where is the AfCFTA muscle to erect and sustain the ‘African bloc’ as proposed in the lofty objectives of the continental body? It looks fine and okay in the words of the Secretary-General of AfCFTA Secretariat, Mr. Wamkele Mene that the target of the trade agreement is to achieve zero duty on 100 percent of all products traded in the continent in the next 15 years. Mene says “Africans should be patient and understand that we are in the initial stages of significance to go together under a single set of rules. What we are doing is not an easy task, it is time-consuming, and it requires patience to see results in years to come.” One hopes we aren’t waiting for Godot?