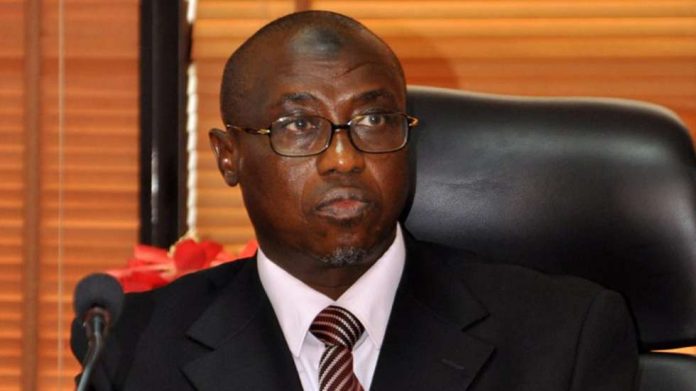 Share this on WhatsApp
Spread the love
The Senate Committee on Ethics, Privileges and Public Petitions has invited the NNPC Group Managing Director Maikanti Baru, and the Managing Director of Shell Petroleum Development Company of Nigeria Limited, Osagie Okubor, over the revocation of the licence of an oilfield, OML 13.
The oilfield was allegedly awarded to the Nigerian Petroleum Development Company, a subsidiary of the NNPC, through an executive fiat.
The invitation followed a probe into the deal by the committee based on a petition to the Senate by the National Coordinator, Global Peace and Sustainability Network, Longers Anyanwu.
The petitioner alleged that OML 13 licence, which belonged to SPDC, was revoked and re-awarded to NPDC without the statutory licensing bid rounds and that the transaction was not made open.
Panel chairman Senator Samuel Anyanwu said that it  is necessary to probe the transaction as Nigeria following the  not Malabu OPL 245 scandal.
According to him, the Senate is determined to block all loopholes through which the country’s resources were being siphoned.
The senator pointed out that there is nothing wrong inviting foreign investors into the country but their activities must not threaten local firms.
The OML 13 was an onshore oil block on the Eastern Niger Delta with an acreage of 1,923 square metres, while it also hosts the Utapate South and Ibibio fields.
ALSO SEE: $25bn NNPC contracts: Kachikwu risks booby traps
Anyawu added that it has a string of producing marginal fields, including the Frontier oil, operated by Uquo, a gas accumulation as well as the 2,000bpd Qua Iboe.
According to him, the OML 13 has a total of 39 oil wells, with a production capacity of about 33,500 barrels of oil equivalent per day.
He said it was made up of Oil Prospecting Licence 2001, 2002 and 2003 while it was formerly operated by Shell Petroleum Development Company of Nigeria Limited.
The petitioner said the licence of OML 13 was however revoked along with other blocks in 2005.
He recalled that OML 13 was offered in the 2007 licensing bid round, when Jahcon International Limited won OPL 2091, Hi Rev Exploration and Production won OPL 2002, while Oil and Industrial Services Limited won OPL 2003, with commitments to pay signature bonuses of $46m, $66m and $34m respectively.
“The said OML 13 was sometime between February and Mach, 2016, revoked and awarded to the Nigerian Petroleum Development Company, the production arm of the Nigerian National Petroleum Corporation through an executive fiat and without going through the statutory licensing bid round,’ said Anyawu.
Share this on WhatsApp