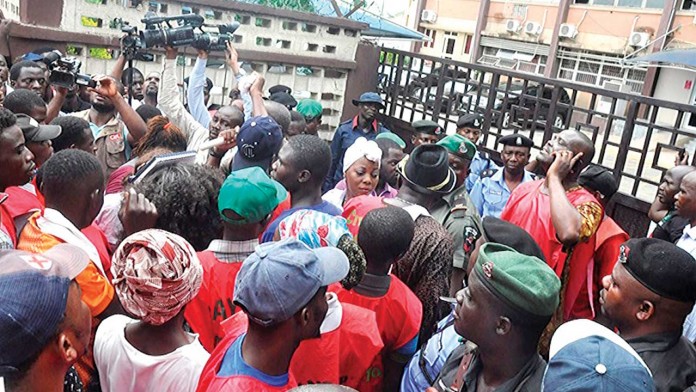 Share this on WhatsApp
Spread the love
By ANDREW OJIEZEL
As Ikeja Electricity Distribution Company (IKEDC) is still struggling to recover from the lost it incurred from first protest, labour again embarked on picketing of Ikeja facilities, paralysed electricity supply around Lagos even as the company condemned the picketing of its facilities.
Decrying the ongoing picketing, the company’s Head of Corporate Communications, Felix Ofulue, lamented that the ongoing picketing of the office might take a long time of darkness if the disruption is not halted by today.
According to him, the poor supply of power currently being experienced by customers on its network is as a result of the inability of the company’s technical personnel to access Business Units, Undertakings Offices and sub stations following the barricading of entrances and exits of all operational locations within the Ikeja Electric Network.
“The Unions, parading as Citizens Access to Electricity Initiatives (CATEIN), and working in collaboration with the Civil Society Group, delivered a 15 point demand list at the Corporate Headquarters of Ikeja Electric Alausa, Ikeja. The group which claims to be made up of artisans, traders, shoemakers and ironsmiths, also included the immediate re-instating of the 229 separated staff, who did not scale through the recently concluded appraisal exercise, as part of their conditions which must be complied with in order to end the picketing exercise.”
ALSO SEE: Eko DISCO explains worsening power outage in Lagos
In his statement, Ofulue, expressed displeasure at the situation, just as he recalled how Lagosians had gone through untold hardship because of self-serving motives of some union leaders in the month of March. Speaking further, he reminded Labor leaders that Ikeja Electric had approached the National Industrial Court to intervene and in the filed suit (NICN/LA/228/2016 ), Ikeja Electric had secured a restraint  barring “the National Union of Electricity Employees (NUEE), Senior Staff Association of Electricity and Allied Companies (SSAEAC), Nigeria Labour Congress (NLC), their agents, officers, privies, representatives or otherwise, whether acting of their own accords or in concert with other bodies, persons or unions, from disrupting or shutting down the operations of the Company or  barricading the entry and exit points of her Corporate Headquarters located at Obafemi  Awolowo Way, Alausa Ikeja, or any other premises or location where the Company carries out commercial and (or) technical operations.”
He warned parties to the protest to desist from further obstruction of access points at all IE locations, noting that Ikeja Electric would seek further redress appropriately.
Ofulue noted that as a responsible company, Ikeja Electric had no other choice than to deal within the limits of law. He however encouraged Lagos residents to speak out and not allow a few individuals to hold many to ransom.
ALSO SEE: Fashola makes fresh boost for improved power supply
Commenting on the issue of the appraisal exercise, Ofulue stated that the process was open to scrutiny noting that it was curious that Labor was silent about over 1000 union members who scaled through the process and are still in the employment of Ikeja Electric.
“Ikeja Electric is an equal opportunity employer. Our standard requirement is excellence.
It is not a witch hunt, it is about performance. We recently hired excellent visually impaired customer service staff, so why would we just send out 229 staff. The argument of Labor is flawed, especially as over 1000 of their own members scaled the same process and are still working with the company till date”, he commented.
He urged Lagosians to resist attempts by Labour to sabotage power supply and assured customers that once it is safe for staff to gain access to all locations, normal power supply
will be restored to the company’s esteemed customers.
Effort to speak with the General Secretary of  NUEE, Comrade Joe Ajaero, over the latest picketing proved abortive as the line did not go through.
Share this on WhatsApp