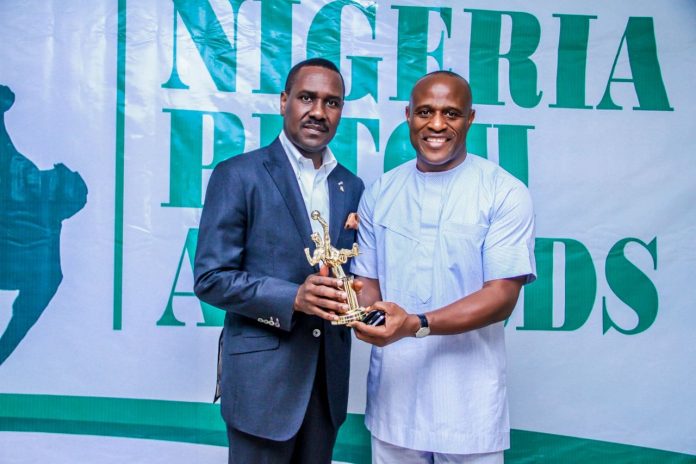 The Nigeria Pitch Awards which was held in Asaba, Delta state saw the Super Eagles players scooping the Nigeria Pitch Award even as the team did not grace the award event, National Daily learnt.
The biggest award of the night went to Ahmed Musa who was awarded  king of the pitch. Others include Francis Uzoho who won Goalkeeper of the year, Defender of the year award went to William Ekong while Wilfred Ndidi was awarded the  Midfielder of the year, and Odion Ighalo who won Striker of the year.
Adebimpe Quadri was awarded the Referee of Year while the Coach of the Year went to Gbenga Ogunbote.
Governor of the year, Governor Ifeanyi Okowa of Delta State, while best grassroot football promoting state went to  Lagos state.
ALSO READ:Organizers announce March 23 for Nigeria Pitch Awards
Some NFF top guns who were in attendance include NFF’s 1st Vice President Barrister Seyi Akinwunmi, NFF board members led by the Federation’s technical chairman Alhaji Aminu Yusuf Fresh, Mr Chidi Ofon, and as well Mr Majeek who was just re-elected  as Ogun state F A chairman.