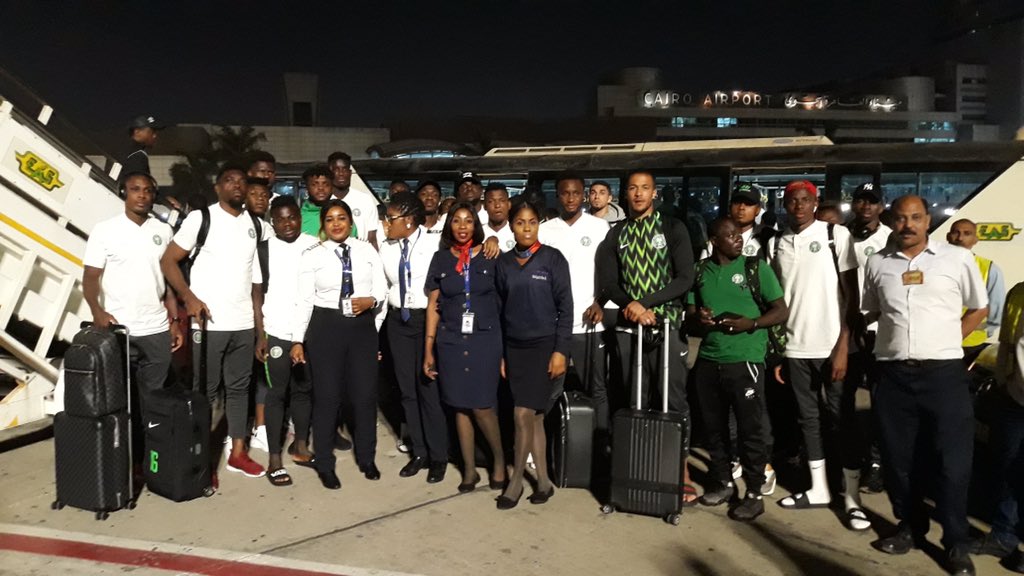 Share this on WhatsApp
Spread the love
Nigeria’s hopefuls for glory at the 32nd Africa Cup of Nations finals landed in the city of Ismailia, Egypt on Sunday evening, 12 days to the kick-off of the championship.
After City of EnglanTechnical Adviser Gernot Rohr cut Leicester d forward Kelechi Iheanacho and Rotherham United midfielder Oluwasemilogo Ajayi from the earlier roster of 25, the Super Eagles and their full complement of technical and administrative officials, alongside their Zimbabwean counterparts with whom they played a 0-0 draw in a friendly on Saturday, flew together to Ismailia aboard a chartered MAX Air flight from Asaba. The aircraft refueled at the Aminu Kano International Airport, Kano before heading towards Ismailia.
The three –time African champions are staying at the Hotel Mercure in Ismailia, where they will spend one week before heading to Alexandria – venue of their Group B matches during the championship. On Sunday, 16th June, the Eagles will file out against Senegal’s Lions of Teranga (Africa’s number one –ranked team) in their final pre-AFCON friendly, in Ismailia.
ALSO READ:Why Nigeria won’t see single digit inflation this year – Experts
The playing body was led by midfielder Mikel John Obi, the 14 –year veteran who had been out of the group since the end of the 2018 FIFA World Cup finals in Russia but posted a Man-of-the-Match performance in Saturday’s sendforth friendly with the Warriors at the Stephen Keshi Stadium.
Nigeria won the Africa Cup of Nations in 1980, 1994 and 2013, and with a young and ambitious squad that already experienced highest-level competition steam at the FIFA World Cup, should be one of the teams to watch out in Egypt.
Share this on WhatsApp
Related Topics:FIFA World Cup finals in RussiaTechnical Adviser Gernot Rohr cut Leicester
Up Next