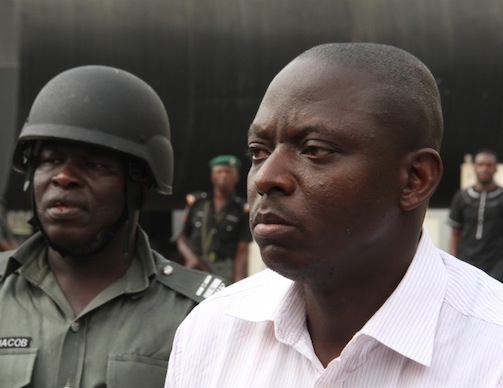 A former Director General of the Nigerian Maritime Administration and Safety Agency (NIMASA), Patrick Akpobolokemi has denied looting N2.6 billion from the agency while he was the helmsman.

He narrated before the Federal High Court in Ikoyi, Lagos, where he is being prosecuted alongside five others, how he handled a total of N2,365,600,000 released to NIMASA for a maritime security project by the administration of ex-President Goodluck Jonathan.

According to him, then President Jonathan approved the release of N2.3 billion for NIMASA in three tranches between 2013 and 2015 for the implementation of the International Ships and Ports Facility Security (ISPS) code.

He said the funds were approved by Jonathan following a letter he (Akpobolokemi) wrote to the Federal Government through the Office of the National Security Adviser, occupied then by Col. Sambo Dasuki (retd.).

Akpobolokemi testified in his own defence before Justice Ibrahim Buba, where he is standing trial alongside the then Executive Director, Maritime Safety and Shipping Department of NIMASA, Capt. Ezekiel Agaba.

Led in evidence by his lawyer, Dr. Joseph Nwobike (SAN), Akpobolokemi told the court that the idea of the ISPS code came from the September 11, 2001 terrorist attack on the United States of America.

He said the security code was adopted by the International Maritime Organisation, which requested all member states to implement it in order to forestall terrorist attacks like that of September 11.

He added that the requested funds in the letters were approved by the President and released to NIMASA through Dasuki’s office.

Akpobolokemi further stated that due to the technical nature of the project, he decided to constitute a committee, named ISPS Code Implementation Committee headed by Agaba.

He said the committee opened an account, into which funds for the project were released, adding that he was neither a member of the committee nor a signatory to the account.

He recounted that as soon as the funds were disbursed to NIMASA, he minutes letters to Agaba to carry out the directive from the Presidency.

He said contrary to the allegation by the Economic and Financial Crimes Commission (EFCC) that the funds for the security project was diverted, the project was actually implemented with foreigners even commending NIMASA.

“I was satisfied that the ISPS Code project was well performed at least up till the time I left the agency,” Akpobolokemi said.

Justice Buba adjourned till February 13, 2018 for Akpobolokemi to continue his testimony at the request of Nwobike.‎

AGF opens up on what Buhari knew about Maina’s reinstatement