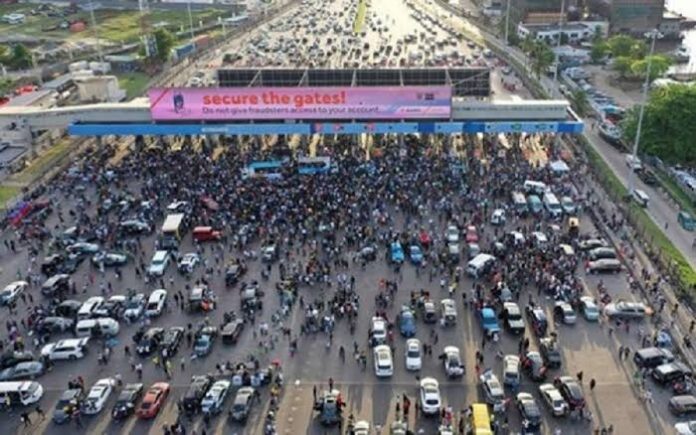 A mass killing by soldiers allegedly happened at Lekki—the economic hub of Lagos. Its gore should be hard to clean up, though a global rights group tells the world otherwise

After Amnesty International led the world on a wild-goose chase to have an eyeful of a massacre by Nigerian soldiers at Lekki in Lagos on October 20, the country director of Amnesty Osai Ojigho has an obligation. And, of necessity, she must fulfil it. First, for justice’s sake, and, second, for her organisation’s integrity, which matters little, though.

So far, the facts of the alleged massacre of #ENDSARS protesters aren’t stacking up. But Amnesty is stretching them. Still gaping are many holes—holes very difficult to paper over.

From its first report on Oct 21, Amnesty relied on its on-the-ground investigation of the overnight incident—visuals streamed on Instagram and other social media platforms by protesters turned victims, and what it gleaned from their own narratives. It also claimed no fewer than 12 people died at two locations of the incident: the Lekki Toll Gate where a company of Nigerian soldiers opened fire on protesters who defied a curfew; and Alausa, the headquarters of the Lagos government, where soldiers and police also shot and killed protesters.

At Alausa, two people were shot dead, and many wounded, the report stated. The shooting here has hardly got any chilling reporting and amplification. But the Lekki scene was made more macabre, and it got all the blood-and-thunder coverage TIME, BBC, CNN, and local media like to give any news that bad. Yet Amnesty, whose account all of them quote hysterically, failed to give the exact number of casualties at this location in the report.

To go by Amnesty’s body count, 10 protesters, at least, were gunned down at the toll gate. That deduction could raise more questions, and help the NBA and Nigerian activists get their fingers out to dig for facts. But they all have joined in acting out the Amnesty passion play.

The second report by Amnesty came October 28, eight days after the massacre. None of the 12 protesters killed was identified yet. No relatives showed up. To explain why, Lagos lawyer and rights activist Femi Falana said people have been declared missing. Not given to frivolities, he certainly knows what he says, and has his fact to have said it. But at a time like this, when bad governance and security agencies’ brutality and extra-judicial killing are red- hot issues, the senior advocate could have helped somehow. Either by directing those relatives to the Justice Doris Okwuobi Judicial Panel of Enquiry Lagos set up to investigate the massacre. Or, as invested as he is in fighting the cause of the ENDSARS peaceful protest turned bloody, Falana could have directed them to an independent body, the Nigerian Bar Association, or Amnesty.

And the accounts by the victims or their relatives, in flesh and blood, would have formed the meat and potatoes for Amnesty’s second report. But the update reads like a rambling. It says nothing about the Alausa episode, focuses only Lekki. And it is creatively worded to stir emotions with a chronicle of sceneries, settings, montages of social media videos—all reported from the omniscient point of view—of the anti-heroes (soldiers), actions, commentaries, and other frills that will readily crumble as evidence of a massacre. The remaining 10 heroes, dead as Amnesty claimed in its first report, were not accounted for again—though the group investigated it firsthand. Nor were the wounded identified in the report. Not even in any the videos whose contents were a concatenation of ratatas of gunshots in the air, protesters’ screaming, and flags thrown on the tarmac. One of the videos pictured a protester lying belly down, bopping his head once a while, probably wounded, while the remaining protesters charged about in a scene the whole world has been fed as a massacre—a massacre with no blood, no bullet gash. Those around the man that was down could have posted his picture online if he had died. They could have told his relatives to come to the panel for justice. Or, at worst, they could have approached rights activists like Falana who said, during a virtual meeting ENDSARS organized on Tuesday, the victims were afraid to come out. The lawyer even claimed the wounded hospitalized discharged themselves because they ‘understand the environment under which we operate’.

Sure they do. They knew all along.

The protesters knew the environment while they sustained the protest for two weeks; they knew it when they defied the curfew; they knew it when they dared the trigger-happy soldiers deployed from the nearest division. It’s hard to believe the bold protesters will now run when justice is within reach—when Uncle Sam and the Queen are watching—when Lagos Gov. Babajide Sanwo-Olu is all jitters—when shame and hammer from across the world will soon fall on those involved in the killing, a massacre for that matter. So it’s all defeatist for Falana and other seekers of the truth of this massacre to serve up ‘understanding the environment’ as an excuse to give up on justice.

It’s bad enough for a Sanwo-Olu to call armed soldiers, especially Nigerian soldiers with their horrendous rights record, to disrupt a peaceful protest. (Was there peace in Lagos from the morning of Oct 20?) It’s bad for soldiers to shoot at unarmed, flag-waving protesters that defy a curfew. It’s condemnable and ICC-worthy, in every respect.

But media reports and CSO aggression based on Amnesty’s report curated from Twitter and Instagram posts make it worse—because it doesn’t help in the quest for justice. It makes the fight for justice in the Lekki massacre of two laughable, considering the entire world now acts on Amnesty’s single narrative whose sources—DJ Switch and Onesoul among others—conflict.

Switch, a disc jockey named Obianuju C. Udeh, was one of the stars of the ENDSARS protest. In an Instagram video two days after the incident, she said she piled up 15 dead bodies at the feet of the soldiers, amidst the rain of bullets during the bloodbath. It was heroic she didn’t get shot. And she took no picture of any of the dead or the wounded even as she streamed the noise of resistance and sound of gunshots on Instagram earlier that night. She witnessed the massacre Amnesty obviously longed to report.

Another star of the dark night , however, wouldn’t be sure of a large-scale murder. Ideh C. Innocent, a filmmaker known as Onesoul, told the Premium Times he rode in his car deliberately into the shooting that night, and started evacuating the wounded. At a point, he confronted the soldiers trying to prevent him from doing that. Onesoul said he saw no dead body, and made a roundabout statement of the fact that no massacre happened that he saw. Not that he was defending the government—because he roundly condemned the shooting.  He also mentioned two hospitals—Doren Specialist Hospital (which ignored questions for this piece) and Grandville Hospital, both at Ajah—where he took the carloads of wounded protesters for treatment. Like Switch, he didn’t take pictures of the wounded, even at hospitals. An Instagram celeb with over 24,000 followers shouldn’t have let that opportunity slip through his fingers.  But Onesoul said one of them later died. No name.

With all their chillers, neither Switch nor Onesoul, death-defying as we now see them, has approached the panel to present their evidence—10 days after the massacre. Yet Amnesty has strung up all the contradictory pieces, and embroidered the patch in two reports that say practically nothing anybody can grab. Oh… Well. CNN, BBC, Channels TV, Arise TV, and many local newspapers were taken.

To cobble up a report of a massive extra-judicial killing like Lekki’s requires honesty and a fine-tooth comb. Amnesty boasts neither of the two.

We can understand why: pressure to crank out a damning report in good time. Amnesty is known for that. And that pressure makes its directors gild the truth and ham up bad news most times.  They aid catastrophes waiting to happen—or tip a bad government into a worse humanitarian disaster with rapid-fire reports so they can notch up an impact. Like the Indian experience. The pressure to tar India PM Narendra Modi as a violator of rights led the group into funneling money through Amnesty International Pvt Ltd, a shell company which received Rs 51.72 crores (over $6 million) as ‘export proceeds’ between 2013 and 2019 from Amnesty’s secretariat in London. Investigators said nothing was exported by the company, and the practice violated Indian financial law.  Amnesty had to shutter his India’s office in September, claiming a witch hunt.

In its fight for justice, the end has always justified the means. In 2010, Amnesty had dalliance with the Taliban in Afghanistan. One of its senior staffers, Gita Saghal, exposed that double standard, according to NGO Monitor. As expected, Amnesty denied all these and many others.

But there’s something it can’t shake yet: a report on its work culture of pressure, and its offspring of bullying, sexism, racism discrimination against LGBQT, and more rights violations. It was a scandal when it was released in 2019. One of the staffers in Amnesty’s Paris office committed suicide in his office in May 2018. According to the Staff Wellbeing report by Kon Terra Group, Gaetan Mootoo left a note that made it clear that work pressures made him do himself in.

Mootoo was a long-serving employee there. Unlike Ojigho, a new broom in Amnesty’s work. She took over the group’s office in Nigeria in 2017.  The Lekki massacre wouldn’t be her first crisis to handle. She already covered Nigeria’s staples of rights violations: Boko Haram, federal troops’ extra-judicial killing, police and IPOB secessionists, and all that. But the October 20 incident was a major one. The pressure will be high on her to make the best—worst—of it. The grimmer she could paint it, the better—for her report and Amnesty’s donors like the Dutch Postcode Lottery and others.

That manipulation, however, is obstructing justice in the Lekki shooting. It has exposed all the claims as bereft of evidence. It has helped Gov. Sanwo-Olu lied about inviting the soldiers, and he may weasel out of the web eventually if none of the victims and rights fighters come forward with evidence of the massacre. And the over N1 trillion loss the mayhem that followed the incident caused will give the Lagos government a peg to hang its case—against the protests.

Then, ultimately, the jaundiced report Amnesty sold the zillion rights groups and coalitions in Nigeria will cast them as mere sabre-rattlers.