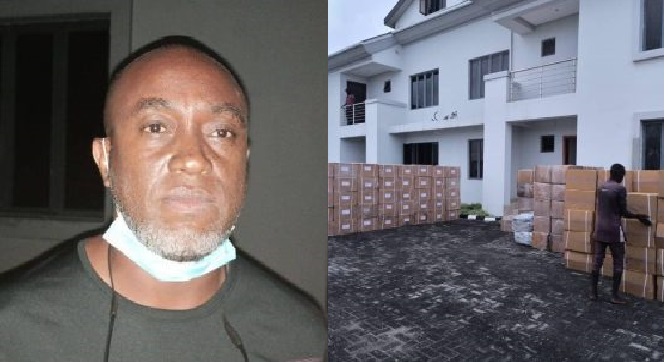 Another drug baron luxuriating at the VGC, Lekki, Lagos, has been frozen out by the NDLEA following credible intelligence and a raid on September 30th September.

Femi Babafemi, the agency spokesman, said in a press release Ugochukwu Nsofor Chukwukadibia stashed no fewer than 13,451,466 pills of Tramadol 225mg in one of his properties at Plot A45 Road 2.

The stash is worth N8.9bn in street value, according to the agency.

“Before his arrest, Ugochukwu who hails from Ihiala local government area of Anambra state has been on the Agency’s watch list as one of those behind the tramadol drug cartel in Nigeria,” Babafemi said on Monday.

“Preliminary investigation shows the 52-year-old has about six mansions within the VGC, one of which he uses to warehouse the tramadol consignment, while he lives in the one at Plot Z-130 Road 67 and another as his office.”

Ugochukwu, who owns Autonation Motors, orchestrated a fire outbreak to destroy some of the cartons of illicit drugs he warehoused before the NDLEA bust.

Other valuables recovered during the raid include five exotic vehicles: two SUVs, a bullet-proof jeep, and others.

“I’ll like to reassure Nigerians and other stakeholders of our preparedness to work with them on this onerous task of saving our people from the drug scourge,’ said NDLEA chairman Buba Marwa.

Weeks ago, the agency arrested an international coke ring with a haul that was worth over N90bn secreted at a warehouse in Ikorodu.

NDLEA recovers N8.8bn worth of tramadol, nabs suspect in Lagos