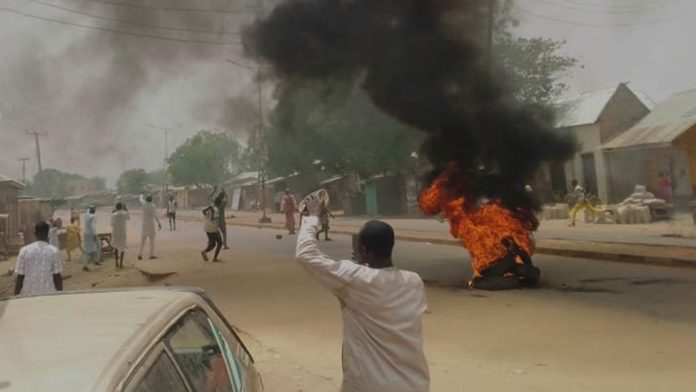 A pastor has been reportedly injured in an attack on the Katangan area of Warji LG of Bauchi over an alleged case of blasphemy.

This comes weeks after Deborah Samuel, a female student of Shehu Shagari College of Education, was attacked by a mob and set ablaze over comments purportedly considered to be an insult to Prophet Mohammed.

The crisis started when a mob got a hint that a Christian girl in the town allegedly spread a blasphemous message on social media.

Many houses were said to have been burnt in the riot, including a church situated in the area.

“What I learnt was that a Christian girl allegedly posted and commented on something on social media which has to do with the incident in Sokoto and that was how it started,” the source said.

“The situation there is more than tension since many houses have been burnt down. But no life was lost, to the best of my knowledge.

“A shop which belongs to an ECWA Church in the area was also burnt down. And I learnt that the District Head of the area and the leaders are on top of the situation. The police have also been informed about it.”

One of the leaders of the Christian Association of Nigeria (CAN) in the state, who spoke to journalists, said the police and a representative of the Bauchi government are aware of the situation.