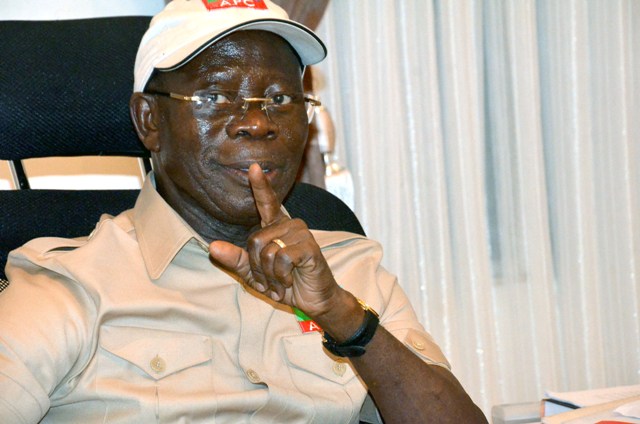 The former national chairman of the ruling All Progressives Congress (APC), Adams Oshiomhole, may have recovered little ground even after he has been removed from the leadership of the party, as court struck out a leadership suit against him on Thursday.

Mustapha Salihu and five others who filed the suit in March had on resumption of hearing on Thursday withdraws the litigation, ending the legal battle with the former national chairman.

A Federal Capital Territory (FCT) High Court presided by Justice Danlami Senchi had, on the request of the applicants at the resumption of the suit, dismissed the suit against the past APC national chairman, Adams Oshiomhole, and three others.

The suit was filed by Mustapha Salihu and five others on March 4, and it led to the suspension of Oshiomhole from parading himself as APC national chairman.

The Court of Appeal sitting in Abuja, three months the commencement of the suit at the FCT High Court, delivered judgment in June, upholding the suspension of Oshiomhole as APC national chairman.

At the APC NEC meeting last week, party members were ordered to withdraw all cases in court as part of the reconciliation process. Accordingly, on return to the FCT High Court for hearing on the substantive suit, counsel to the plaintiffs, Oluwole Afolabi, in a motion, requested to withdraw the suit.

He expalioned to the court that the suit is being withdrawn in compliance with the directive of APC leaders at the NEC meeting that all court cases be discontinued in the interest of peace.

The presiding judge, Justice Senchi, having acknowledged no resistance to the withdrawal of the suit by counsel to Oshiomhole, Ginika Ezeoke, in his judgment, dismissed the suit and ordered parties to bear their respective costs.

That provided huge relief for Oshiomhole even though he has been removed from office.

Meanwhile, Oshiomhole has been appointed into the campaign team of the APC for the Edo governorship election.